Taming Chemistry at the Quantum Level 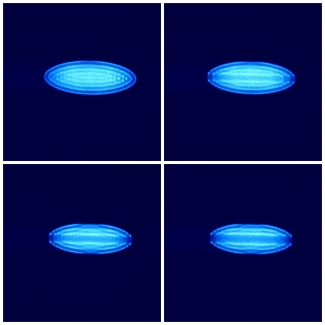 Lewandowski and her team of researchers are using lasers to control chemical reactions at the quantum level. Specifically, they are electrodynamically trapping Calcium ions and then cooling them with lasers until they form a Coulomb crystal, in which the ions evenly pattern themselves. The team can then use this laser to control whether the ions react with radicals. Above we see four images of various Coulomb crystals, where ions that have not yet reacted with radicals brightly glow.

In the vast stretches between solar systems, heat does not flow and sound does not exist. Action seems to stop, but only if you don’t look long enough.

Violent and chaotic actions occur in the long stretches of outer space. These chemical reactions between radicals and ions are the same reactions underlying the burn of a flame and floating the ozone above our planet. But they’re easy to miss in outer space because they’re very rare.

“It’s very low density in the interstellar medium, so the probability of seeing another atom or molecule is very low,” said JILA Fellow Dr. Heather Lewandowski. “They could go for kilometers before seeing another particle.”

And when meetings are that rare, the particles must be reactive. “If you do run into another particle, you want to have a high probability of reaction if you are ever going to react,” said Lewandowski.

Radicals and ions are both very reactive. Their reaction enthusiasm stems from a lack of an electron. The ions involved are positively charged atoms missing an electron; the radicals are molecules with an unpaired electron, or an electron seeking an orbital mate.

Lewandowski, a molecular physicist at JILA and an Associate Professor of Physics at the University of Colorado Boulder, studies the reactions of ions and molecular radicals. In their latest publication, Lewandowski and her group demonstrate control of the reaction rate at the quantum level, bringing new insights into these elusive yet eager reactions.

The complications of this experiment start with the reactants themselves. Even getting both reactants into an experiment can be a challenge. The radicals, for instance, are so reactive that most react with each other before the experiment begins.

And while radicals are easily distracted, ions are pushy. “You can’t get a high density of ions because they repel one another,” explained Lewandowski, citing the coulomb repulsion, or pushing away, that stems from electric charge.

The low densities that result from this repulsion lower the probability that ions and radicals will meet within an experiment. And for most experiments, which have only a thousandth of a second to operate, that can mean zero to few reactions.

Lewandowski’s group overcomes this problem by squeezing Calcium ions together using electromagnetic fields, and then cooling them with lasers to squeeze them even closer. By packing the ions closer together, the team increases the chance of radicals colliding with their ions.

“And when you get them cold enough, these ions form a crystal,” said Lewandowski, meaning that the balance of pushing and squeezing forces the ions to pattern their positions. Once the ions are frozen into position, the team then has a million times longer than most other experiments to observe reactions.

But one can only learn so much by just observing reactions. Lewandowski knew she could learn even more by controlling them too.

Lewandowski’s team uses lasers to not only command the ions’ movements, but to command their reactivity as well. Specifically, they use lasers to control the ions’ quantum states. While usually in the ground state, a laser can impart energy to the ions’ electrons and put them into an excited state.

“When calcium ions are in the ground state, they don’t have enough energy to react with the radicals,” explained Lewandowski. “When we put them into the excited state, now they have all that energy from the excitation that can be used in the reaction.”

Because the ions only react with radicals in the excited state, Lewandowski can control how fast the ions and radicals react. Ultimately, she can vary the reaction rate by a factor of four, and wholly turn off the reactions by simply turning off the laser.

This quantum control made it possible to extensively study the reaction of Calcium ions and Nitric Oxide radicals down to the reaction pathways. This chemical precision affords new understanding in modeling future reactions. But ultimately, Lewandowski would like to apply the techniques of quantum control to more exciting reactions, like those including Hyroxide (otherwise known as OH).

“OH is everybody’s favorite radical, but you have to break apart other molecules inside your chamber to get the OH,” said Lewandowski. Always a step ahead, she already has plans to make this experiment a reality.

In the near future, Lewandowski hopes to combine these two major experiments and obtain full quantum control of molecular radical and ion collisions. This development will allow researchers to determine how rotations and vibrations within molecules affect reactions, bringing a new level of precision to our understanding of chemical processes.

This research was published in Physical Review A in September 2018. Additional authors of this work include JILA graduate students James Greenberg and Mikhail (Kyle) Miller, recent JILA postdoc Dr. Philipp Schmid, and Dr. John F. Stanton from the University of Florida.

JILA researchers are using lasers to control chemical reactions at the quantum level. This control brings new insights to our understanding of reaction pathways, and serves as a proof-of-principle that similar techniques could revolutionize our study of chemical processes.