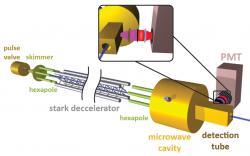 A diagram of an instrument to  make precise measurements by putting the brakes on fast-moving OH molecules.

The fine structure constant is getting a lot of attention these days. Known as α, it is the "coupling constant," or measure of the strength of the electromagnetic force that governs how electrons, muons, and light interact. What's intriguing is that new models for the basic structure of matter predict that α may have changed over vast spans of cosmic time, with the largest variations occurring in the early universe. However, the Standard Model says a has always been the same. Our basic understanding of physics depends on scientists' ability to determine whether or not α is an "inconstant constant."

Astronomers and precision measurement experts are teaming up to solve this mystery by taking advantage of the special properties of highly reactive OH molecules. OH is abundant in outer space and naturally emits microwave radiation at four specific frequencies when it returns to its ground state after being excited by absorbing radiation from nearby stars or colliding with other interstellar molecules. These natural "masers" can be detected on Earth, some after being created billions of years ago in the early universe. And because each OH transition frequency has a different dependence on the value of the fine structure constant, it should be possible to compare the value of α 10 billion years ago with its value today - provided astronomers and laboratory scientists can measure two of the four OH transition frequencies precisely enough to detect small differences in α.

Until recently, the best laboratory and astronomical measurements of the two main OH transitions had uncertainties of 100 Hz - much too large to detect small changes in α. However, Graduate Students Eric Hudson and Brian Sawyer and Fellows Heather Lewandowski and Jun Ye have now improved the precision of one OH transition frequency measurement by 25-fold (to ±4 Hz) and of a second by tenfold (to ±12 Hz). The researchers, now including NRC Postdoctoral Fellow Benjamin Lev, are currently working to achieve similar improvements in the measurement precision of the remaining two "satellite" OH transitions. The researchers expect to have new results by the fall of 2006 when an international team of astronomers will use the Westerbork Synthesis Radio Telescope to more precisely measure OH transitions that occurred 10 billion years ago.

Hudson and his colleagues were able to make their precise measurements by putting the brakes on fast-moving OH molecules until they moved slowly enough through a microwave cavity to be precisely measured. Their experimental apparatus, shown at right, roughly resembles an atomic fountain clock. Using it, the researchers were able to make the world's first precision measurements on cold molecules and determine the fundamental limits on the change of a (averaged per year) as precisely as the best measurements done with atomic clocks.   - Julie Phillips