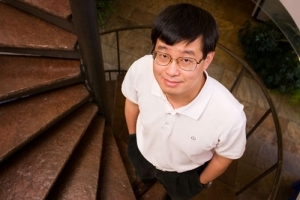 The past recipients are people who pioneered quantum information science, such as Peter Shor on Shor algorithm, Ignacio Cirac, Peter Zoller and David Wineland on the first quantum logic gate, and Anton Zeilinger for quantum communication, etc.  Jun is sharing this year's prize on quantum sensing with Prof. Hidetoshi Katori (Univ. Tokyo) on optical atomic clocks and Carl Caves (UNM) who first proposed quantum light for LIGO (in 1980).

Quantum mechanics, discovered at the beginning of the last century, has been an enormously successful theory of nature and has led to the development of many of today’s most widely used technologies that completely changed the landscape of our society. In past decades, profound progress, made both in our understanding of exploiting quantum superposition and entanglement for new ways of information processing and in the experimental methods of coherent control and interaction of individual quantum particles, has given birth to an emerging field of quantum technologies, also known as the second quantum revolution, which moved beyond the first quantum revolution that simply exploited naturally occurring quantum effects. The second quantum revolution has been driving and enabling a new generation of classically impossible tasks ranging from unconditionally secure quantum communications, breathtakingly powerful quantum simulation, and quantum computation, to extremely sensitive measurements.

To promote the second quantum revolution, a new science foundation, the "Micius Quantum Foundation" has been established in 2018 thanks to generous donations from private entrepreneurs. This Foundation is named after Micius, an ancient Chinese philosopher who lived in a similar period to the Western philosopher Democritus. Micius strongly stood for peace, put forward the concept of "universal love", and performed original scientific work such as the pinhole experiment that proved light traveled straight. His book contained some preliminary idea of Newton's first law of motion, which wrote: "The stop of motion is due to the opposing force... If there is no opposing force... the motion will never stop." Micius also held a belief that objects can infinitely be divided into small pieces, but there is a smallest fundamental unit of particles, a concept with coincidence to our modern quantum physics.

One of the important missions of the Micius Quantum Foundation is to establish the “Micius Quantum Prize” to recognize the scientists who have made outstanding contributions in the field of quantum communications, quantum simulation, quantum computation, and quantum metrology. The revenue of the Micius Quantum Foundation is distributed in the form of prizes. Each honoree will receive a prize of 1.25 million Chinese yuan (after-tax about 150,000 US dollars) and a gold medal.

Carlton Caves, University of New Mexico
For his foundational work on quantum metrology and quantum information theory, especially for elucidating the fundamental noise in interferometers and its suppression with the use of squeezed states.

Jun Ye, JILA, University of Colorado Boulder and Hidetoshi Katori, University of Tokyo
For their groundbreaking achievements in precision quantum measurements, in particular for the development of extremely stable and accurate optical atomic clocks.

More information is provided in the official website http://miciusprize.org