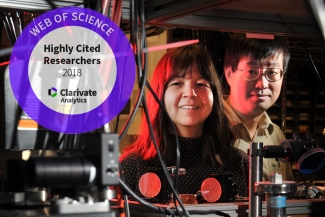 JILA Fellows Jun Ye and Deborah Jin (1968 to 2016) have been named Highly Cited Researchers for 2018 by Clarivate Analytics.

JILA Fellows Jun Ye and Deborah Jin (1968 to 2016) have been named Highly Cited Researchers for 2018 by Clarivate Analytics.

The list of Highly Cited Researchers, published annually since 2014, recognizes scientists across the world who have demonstrated significant influence through publication of multiple highly cited papers during the last decade.

Clarivate’s list of Highly Cited Researchers is determined by production of multiple papers whose citations rank in the top 1% in Web of Science. The 2018 list surveys papers published from 2006 through 2016, across 21 fields of science and social science. Approximately 6,000 researchers were named Highly Cited Researchers in 2018. Ye and Jin are among 211 physicists across the world included in the list.

Although Debbie Jin passed away in September 2016, she remains on the list covering publications from the period 2006 through 2016, reflecting her enormous impact on science even during her courageous battle with cancer. Jin and Ye were close collaborators and friends, jointly publishing many of the key scientific papers on the production, characterization and applications of quantum degenerate gases of polar molecules.

“It is humbling to see the impact that both Jun and Debbie continue to have on worldwide physics research, even two years after Debbie’s passing,” said Thomas O’Brian, a JILA Fellow and chief of the Time and Frequency Division at the National Institute of Standards and Technology (NIST).