The Ultramodern Molecule Factory: I. Doublons 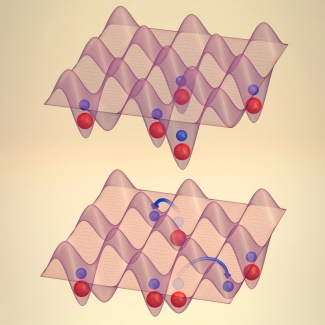 The Jin-Ye group’s new method of creating just pairs of potassium (K) and rubidium (Rb) atoms (known as doublons) and nothing else inside a crystal of light (optical lattice) paves the way for upcoming JILA experiments in intermolecular communication, ultracold chemistry, and quantum simulation.

The old JILA molecule factory (built in 2002) produced the world’s first ultracold polar molecules [potassium-rubidium (KRb)] in 2008. The old factory has been used since then for ultracold chemistry investigations and studies of the quantum behavior of ultracold molecules and the atoms that form them. The Jin-Ye group, which runs the molecule factory, is now wrapping up operations in the old factory with experiments designed to improve operations in the ultramodern factory, which is close to completion.

Recently, graduate student Jacob Covey and both experimentalist and theorist colleagues came up with an ingenious way to ensure that every energy well in the crystal of light (optical lattice) inside a molecule factory is either (1) empty or (2) contains exactly one K and one Rb atom, both in their motional ground states, which is ideal for KRb molecule formation. The group also studied the conditions that kept the K atoms on top of the Rb atoms in the energy wells and the conditions that allowed the K atoms to just hop away.

Once the group made the doublons, they characterized them and figured out how to avoid a tiny resonance that caused many unwanted KRb molecules to form in an excited state. Then they studied conditions that allowed one or both atoms to hop out of the energy wells so they could prevent these hops. This new information will allow the group to increase the fraction of lattice sites occupied by doublons inside a three-dimensional crystal of light. Increasing the filling fraction will open the door to studies of long-range intermolecular communications, ultracold chemistry, and quantum behaviors!

This achievement will give the ultramodern molecule factory the capability of hosting experiments to explore the fundamental physics of not only the KRb molecules, but also of the individual K and Rb atoms. Plus, the new factory should be able to experimentally test theories that explain the interactions of bosons like the Rb atoms with fermions like the K atoms in an optical lattice. (Bosons are particles that don’t mind piling up in the same energy state, whereas only two fermions with opposite spin can occupy the same energy state.) The physics will likely be quite interesting when KRb molecules densely populate the crystal of light, as no one yet knows the microscopic details of how many quantum particles all talk to each other at the same time.––Julie Phillips

[1] A Feshbach resonance is a special magnetic-field strength where small changes in the magnetic field have dramatic effects on the interactions of atoms in an ultracold gas.