Molecules at the Quantum Frontier 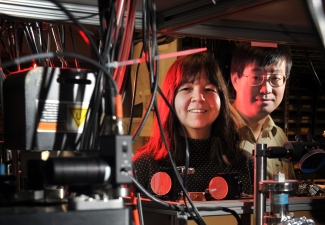 Deborah Jin, Jun Ye, and their students wrote a review during the summer of 2016 for Nature Physics highlighting the accomplishments and future directions of the relatively new field of ultracold-molecule research. The field was pioneered by the group’s creation of the world’s first gas of ultracold potassium-rubidium (KRb) molecules in 2008.

The molecules were made by first creating weakly bound pairs of K and Rb atoms from an ultracold atomic mixture and then using lasers to transfer the atom pairs to their ground state, where they became tightly bound molecules. It sounds simple, but figuring out this process took the Jin-Ye team more than five years of dedicated effort. Making ultracold molecules was, and remains, an extremely challenging endeavor. 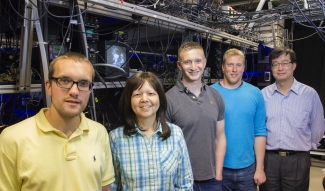 For nearly six years following this noteworthy feat, the Jin-Ye collaboration was the only group in the world that had produced stable ultracold polar molecules in the quantum regime. The first cold-molecule experiments at JILA included studies of ultracold chemistry and collisions in which molecular interactions are governed by universal quantum rules. More recent work has focused on the creation of new types of quantum systems, including molecules confined in a deep three-dimensional optical lattice, where spin-exchange couplings make the molecules behave like tiny quantum magnets. In late 2015, the group reported the production of a gas of polar molecules in its lowest possible energy state.

“It was six years before anyone else made ultracold polar molecules,” said Ye. “But by 2015, there were four groups starting to get results with these molecules, one at the Massachusetts Institute of Technology led by Martin Zwierlein, a second group at the University of Innsbruck headed by Hanns-Christoph Nägerl, a third at the University of Durham (U.K.) led by Simon Cornish, and a fourth led by Dajun Wang at The Chinese University of Hong Kong.”

Two of these groups have strong connections to JILA. Cornish worked as a postdoc with Carl Wieman in 1999–2000 and came to JILA again as a Visiting Fellow in 2015. Wang was a postdoc in the Jin-Ye group from 2007 to 2010.

New research groups entering the ultracold-molecule field should spark rapid progress in the near future as researchers continue to improve their control of the molecules. For example, the JILA group has just completed a new ultracold-molecule apparatus that may one day lead to experimental observation of the growth and propagation of quantum entanglement. Eventually the JILA researchers want to enhance their quantum control and observation by building a quantum gas microscope for observing individual molecules in the optical lattice.

As the field grows, new ultracold-molecule investigations are focusing on new kinds of molecules, including sodium-rubidium, sodium-potassium, rubidium-cesium, and ytterbium-cesium. The new molecules are one reason the paper concludes with an optimistic forecast for the future:

“The field of ultracold polar molecules shows no signs of slowing down, and there should be many fruitful experiments in the next few years.”