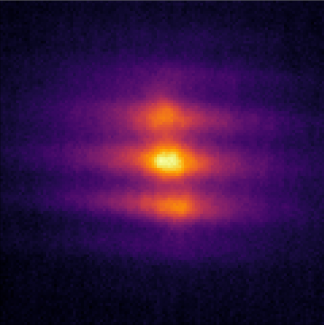 Shadows of atoms trapped in layers of a web of laser light, or an optical lattice, before they are paired into ultracold potassium-rubidium molecules. JILA researchers then used an electric field to precisely control molecular collisions and suppress chemical reactions that would otherwise occur within the layers.

Building on their newfound ability to induce molecules in ultracold gases to interact with each other over long distances, JILA researchers have used an electric “knob” to influence molecular collisions and dramatically raise or lower chemical reaction rates.

These super-chilly gases follow the seemingly counterintuitive rules of quantum mechanics, featuring exact units, or quanta, of energy and often-exotic motions. Thus, the ability to control chemical reactions in stable quantum gases could enable the design of novel chemicals and gases, new platforms for quantum computers using molecules as information-rich qubits (quantum bits), and new tools for precision measurement such as molecular clocks.

The advance is described in the Dec. 11 issue of Science. JILA is jointly operated by the National Institute of Standards and Technology (NIST) and the University of Colorado Boulder.

The new work follows up on Ye’s many previous achievements with ultracold quantum gases. In particular, the advance builds on JILA’s simplified scheme for nudging molecular gases down to their lowest energy state, called quantum degeneracy, in which the molecules start acting like overlapping waves that all interact.

The latest JILA experiments created a dense gas of tens of thousands of potassium-rubidium molecules within a six-electrode assembly, which researchers used to generate a tunable electric field. The molecules were confined in a stack of pancake-shaped laser traps called an optical lattice, but were free to collide within each pancake, like people skating on an ice rink, Ye said.

The JILA team started by preparing a gas in which each molecule was spinning with exactly one quantum unit of rotation. Thus, each molecule acted like a tiny quantum top, spinning around its axis, with only certain values of angular momentum (or speeds of rotation) allowed by quantum mechanics. By changing the electric field, the researchers found special fields (“resonances”) where two colliding, spinning molecules could exchange their rotations, leaving one molecule spinning twice as fast and the other not spinning at all.

The ability to exchange rotations completely altered the nature of the collisions, causing the forces between colliding molecules to change rapidly from attractive to repulsive near the resonances. When the interactions between molecules were repulsive, the molecules were shielded from loss, since they rarely came close enough to chemically react. When the interactions were attractive, the chemical reaction rate was dramatically enhanced.

This is the first demonstration of use of an electric field to resonantly control how molecules interact with each other. The experimental results agreed with theoretical predictions. JILA researchers expect their techniques to remain effective without the optical lattice, which will simplify future efforts to create molecular gases made of other types of atoms.

A collaborator from Paris-Saclay University, Orsay, France, made the theoretical calculations. Funding was provided by NIST, the Defense Advanced Research Projects Agency, the Army Research Office and the National Science Foundation.

Atoms are trapped in layers of a web of laser light, or an optical lattice, before they are paired into ultracold potassium-rubidium molecules. JILA researchers then used an electric field to precisely control molecular collisions and suppress chemical reactions that would otherwise occur within the layers.