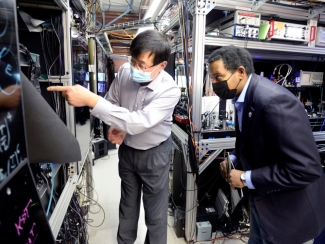 Last week, U.S. Rep. Joe Neguse got a first-hand look at the future of ultrafast lasers, record-setting clocks, and quantum computers on the CU Boulder campus. Neguse visited the university Thursday to tour facilities at JILA, a research partnership between CU Boulder and the National Institute of Standards and Technology (NIST).

It’s a prestigious piece of the Colorado landscape. Since the institute’s founding in 1962, researchers at JILA have helped to bring home three Nobel Prizes. They’ve also developed X-Ray lasers that can fit on a tabletop and despite their small size, shoot bursts of light at speeds of a billionth of a billionth of a second. Then, there are atomic clocks so accurate they wouldn’t lose or gain a second of time over billions of years. Other researchers have helped to send experiments to the International Space Station that chill atoms to just a fraction of a degree above absolute zero.

“It’s always a privilege to be at CU and to get a firsthand look at the world-class research happening here on campus and at federal labs throughout our district," Neguse said in a statement. "JILA is doing phenomenal research in the quantum technology space, modeling the ingenuity and leadership that Colorado is known for. Since coming to Congress I’ve advocated for increased federal funding and modernization for our federal laboratories. Many of the labs in Boulder are in need of facility improvements, construction, and security upgrades and it’s critical we provide the federal resources to accomplish that. I look forward to continuing to advocate for the science and advancement happening here in our community and delivering the support our scientists need.”

Neguse represents Colorado's 2nd Congressional District, including the city of Boulder, and prioritizes issues like climate action, conservation, and education.

The visit came as investments in quantum research and technologies are expanding across the country. In 2021, for example, the federal government allocated $495 million to three agencies, including NIST, through the National Quantum Initiative established in 2018. Neguse also called on congressional appropriators to add at least $250 million to NIST’s budget in the 2022 fiscal year. Although the current fiscal year began on Oct. 1, these funds are still under consideration in the U.S. Congress.

The government is operating education and research programs at 2021 levels through Feb. 18, 2022, based on an agreement signed into law by President Joe Biden earlier this month. NIST funding is slated to grow by more than 30% under proposals in the U.S. House and the U.S. Senate. This funding would aid NIST projects in key areas, including artificial intelligence, quantum information science, STEM education, and infrastructure at NIST facilities.

CU Boulder and JILA have spearheaded several initiatives in recent years to spur new quantum research and train emerging leaders for the state’s growing quantum industry. These efforts include the CUbit Quantum Initiative, which kicked off in 2019. In 2020, the U.S. National Science Foundation awarded CU Boulder $25 million to launch the Quantum Systems through Entangled Science and Engineering (Q-SEnSE) center. Q-SEnSE seeks to tap physicists and engineers across the country to transform the latest scientific findings into technologies that can solve real-world problems.

Philip Makotyn, executive director of CUbit, spoke to Neguse about the promise of what many researchers are calling the "second quantum revolution."

"Imagine you have an electric car that can drive 1,000 miles on a charge because batteries are now better understood because of these quantum systems," he said. "Imagine cars don’t need GPS. They can just navigate on their own, and we have self-driving cars because of quantum sensors and navigation. The point of quantum 2.0 and the huge investment that the U.S. is making is that ... there really are big-picture, world-changing ideas that are about to happen."

Neguse has also proposed relaunching NIST’s academic construction grant program, which was established in 2008 but is currently unfunded. CU Boulder’s partners at the Association of American Universities and Association of Public and Land-grant Universities each support Neguse’s call to restart this program. The competitive program allows universities across the country to apply for federal funds for scientific construction projects. These funds could aid NIST and JILA in modernizing and expanding their facilities.

The proposed academic construction funding, if awarded, will help JILA modernize its building, erected in 1962. During the tour, Becker noted that the investment will be worth it because of the central role that JILA plays in Colorado's burgeoning quantum economy.

"People come from all over the nation to Colorado, and they have a fantastic experience here, and they want to stay here," he said. "We are happy that we can contribute to this ecosystem, and we are thrilled that it's growing like crazy at the moment, but ... we want this trend to continue."

Written by Daniel Strain, Science Writer of the CU Office of Strategic Relations and Communications

More about this story from The Daily Camera.

Last week, U.S. Rep. Joe Neguse got a first-hand look at the future of ultrafast lasers, record-setting clocks, and quantum computers on the CU Boulder campus. Neguse visited the university Thursday to tour facilities at JILA, a research partnership between CU Boulder and the National Institute of Standards and Technology (NIST).