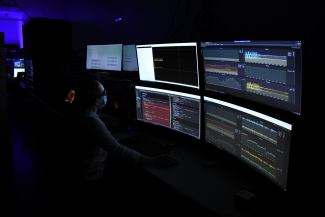 One goal that JILA alumni have in common is to end up in successful jobs, whether in industry or academia. Such is the case for Sara Campbell, an employee at Honeywell Quantum Solutions who works on quantum computing. “We've released two commercial systems, system model, H0, and H1, and I'm building and getting ready for the next model, H2,” Campbell said excitedly. As the quantum computing sector swells with activity and capital, Campbell’s job becomes more important than ever.

Campbell has followed a desire to make a positive impact on society throughout her whole life and including her time at JILA. She enjoyed working on some of the most cutting-edge physics during her work as a Ph.D. student at JILA. “My favorite thing was all the shared resources, like the machine shop and the electronic shop,” stated Campbell. “Jun Ye was my advisor and I worked on one of the strontium experiments.” Sara jokes, “The big thing I did as a grad student was disassembling the world's most accurate clock at the time.” More seriously, she explains, “I think collisions between strontium atoms were sort of a thing that could limit clock performance, or limit how many atoms you could have total. So, rebuilding our experiment as a degenerate gas experiment should help long-term clock development efforts, as well as provide a fun playground for quantum physics.” Campbell would take this interest in quantum engineering with her when she transitioned out of JILA. Campbell said, “After I graduated, I did a two-year postdoc at UC Berkeley, actually in electron microscopy, pretty different. We made the world's most intense laser in order to manipulate the electron wavefunction to extract more information from fragile biological samples.”

The community at UC Berkeley taught Campbell essential skills, and she was grateful for the opportunity to learn about electron microscopy and proteins. After her Ph.D. and postdoc, Campbell wasn’t quite sure what step she wanted to take next. “I was thinking about what I wanted to do, career-wise. And so many of my former JILA colleagues were working at Honeywell, and they all seemed really happy. I just wanted to make an impact and do something that hopefully would be really useful,” Campbell beamed. She then observed, “It seemed to me that in especially in biology and medicine, a lot of the more recent breakthroughs were computational, even in my field of electron microscopy of biological macromolecules. And so, as a hardware person, I thought, ‘how do you like help with that effort?’ I thought working at Honeywell was sort of the best option for me.” Campbell said that she applied to Honeywell during the second year of her postdoc, and was fortunate enough to get accepted.

She enjoys the work she does at Honeywell, knowing it is impacting our understanding of quantum computing and is helping to advance technology. When asked about what advice she would give to those looking forward in their careers, Campbell replied, “Don't put too much pressure on yourself to make the right choice right now, because I don't think there's a single right choice. You can always do something for a while and then try something else later.”