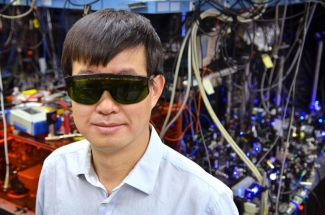 Jun Ye, fellow at the National Institute of Standards and Technology (NIST) and professor adjoint of physics at CU Boulder, has been awarded the 2022 Breakthrough Prize in Fundamental Physics for his pioneering research on atomic clocks. Ye has been a physicist at JILA, a joint institute of NIST and CU Boulder, for more than 20 years.

The prize selection committee cited him for “outstanding contributions to the invention and development of the optical lattice clock, which enables precision tests of the fundamental laws of nature.”

“We are extremely proud to have Jun Ye on our staff and to have him recognized with a Breakthrough Prize,” said James K. Olthoff, who is currently performing the nonexclusive functions and duties of the under secretary of commerce for standards and technology and director, NIST.  “Jun has been conducting trailblazing physics since he arrived at JILA in the late 1990s, as a student of Nobel laureate Jan Hall. Jun found innovative ways to apply the frequency comb that Jan helped to develop, shattering records for the precision of atomic clocks and taking molecular chemistry to new ultracold frontiers with the late Debbie Jin. Considering his past accomplishments, we know he will achieve many other breakthroughs.”

Ye will receive $1.5 million, half of the $3 million physics prize. Hidetoshi Katori of the University of Tokyo will receive the other half of the prize for his work on atomic clocks. Optical clocks are so named because they operate at optical frequencies, which are much higher and therefore enable more precise timekeeping than the microwave frequencies in today’s timekeeping standards. A video of the awards was released this morning by the Breakthrough Prize Organization.

Ye’s clocks use lasers to cool strontium atoms to billionths of a degree above absolute zero and trap them in grids of laser light called optical lattices. (See an animation of how the clocks work.) Ye’s clocks are so precise that they would neither gain nor lose one second in some 15 billion years, roughly the age of the universe. Strontium is among the leading candidate atoms to replace the cesium that is currently used to define the international standard of time, the SI second.

Atomic clocks are crucial to GPS and advanced communications, but Ye’s clocks can extend the applications to make precision measurements of gravity, motion, magnetic fields and many other quantities based on tiny changes in the atoms’ “ticking” rate between two energy levels.

"JILA is very excited and proud of Jun Ye's achievements. We believe that the Breakthrough Prize in Physics is a well-deserved honor for Jun. His accomplishments have paved the way to many new directions in quantum physics, including the development and applications of optical clocks," said JILA Fellow and Chair Andreas Becker.

Ye has previously been recognized with many other international scientific awards, including election to the National Academy of Sciences; four Department of Commerce Gold Medals; the Presidential Rank Award; the Meggers Award of the Optical Society; the I.I. Rabi Award by the IEEE Frequency Control Symposium; and the American Physical Society’s Norman F. Ramsey Prize and I.I. Rabi Prize.

He also leads several quantum research initiatives on the CU Boulder campus. They include the CUbit Quantum Initiative and the $25-million Quantum Systems through Entangled Science and Engineering (Q-SEnSE) center funded by the U.S. National Science Foundation.

Ye holds four patents based on unique laser technologies and has published 380 refereed research publications, more than 100 of them in the most prestigious international journals for physics, including Science, Nature and Physical Review Letters. His work has been cited more than 50,000 times—an exceptionally large number for physicists—and he has presented over 600 invited talks across the world.