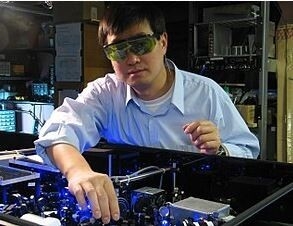 The Julius Springer Prize for Applied Physics recognizes researchers who have made an outstanding and innovative contribution to the field of applied physics. It has been awarded annually since 1998 by the editors-in-chief of the Springer journals Applied Physics A – Materials Science & Processing and Applied Physics B – Lasers and Optics. Recent winners have included Roland Wiesendanger, Xiang Zhang, Viktor Malka, Guus Rijnders, Jerome Faist and Leon Chua.

Dr Jun Ye, Fellow of National Institute of Standards and Technology (NIST) and JILA, member of National Academy of Sciences and Professor Ad joint of Physics at the University of Colorado Boulder, has made remarkable contributions to the understanding of light-matter interactions in the quantum regime through ultra-precision control and measurements. From humble beginnings in home-country China, Dr Ye's potential was spotted early by talent scouts offering him a place in the prestigious Shanghai Jiao Tong University. Looking to the horizons he sought out postgraduate studies under the guidance of eminent quantum scientists M. Scully (Uni. Of New Mexico) and Nobel Laureate J.L. Hall (CU Boulder). His research exploited and developed precision optical spectroscopy and laser atom (and molecule) trapping techniques that have unveiled uncharted territory in quantum superposition states of matter. A key milestone in 2015 was his team's demonstration of the most accurate clock known to humankind, followed in 2017 by another milestone of achieving precision of 3 in 1019.  Built upon a long lineage of scientific advances in creating near ideal perturbation-free isolated atoms exploiting optical lattices traps, harvesting the enormous power of their joint quantum superposition states and unsullied frequency signatures, Dr Ye and his team are world leaders in time keeping and communicating with atoms through light.