JILA Helps Design Alarms for Ventilators in the COVID-19 Pandemic

CZ Biohub built 22 ventilator alarms to adapt more basic ventilators to be used during the COVID-19 outbreak. They reached out to JILA to help design the electronics for the devices.

Patients with severe COVID cases struggle to breathe, and ventilators pump their lungs for them. As the disease progresses, the amount of pressure needed to keep a patient breathing properly increases. Modern, sophisticated ventilators are equipped with sensors that can trigger alarms when unsafe conditions for the patient develop, such as when the air pressure is too high or too low.

As the novel coronavirus quickly spread through the United States in February and March, health care providers realized their intensive care units might not have enough ventilators to treat a surge of COVID-19 patients. Hospitals tried to buy more, but couldn’t.

That’s when the San Francisco VA hospital reached out to Rafael Gómez-Sjöberg, Director of Bioengineering at the Chan Zuckerberg Biohub, a San Francisco-based biomedical research institute. The hospital had a stock of very basic “transport” ventilators on hand that could be used in an emergency. However, those ventilators lack any alarms, so using them would have required a person to sit by each machine around the clock to manually monitor it and adjust its settings to ensure safe operation for the patient—staff the hospital couldn’t spare in the midst of a surge of cases. So, the chief of anesthesiology asked the engineers at the Biohub if they could make some kind of simple alarm device to improve the safety of the transport ventilators.

The bioengineering team immediately started designing the electronics for the device, and had a basic design ready in a few days. However, the team was heavily taxed by other urgent requests related to the virus and, since time was of the essence, extra help was needed. Gómez-Sjöberg decided to ask Ed Marti, a biophysicist at Stanford, if he could help review the existing design to make sure it was correct and design a printed circuit board. Marti has experience with electronics and had mentioned that he could get his JILA ex-colleagues to help.

The design principle of the alarm is very simple. The device monitors the pressure in the tube that goes from the ventilator to the patient and calculates the most basic breathing parameters: the peak inspiration pressure, the peak end-expiration pressure, and the breaths per minute. These parameters are displayed on a small screen on the device, and an audible alarm is triggered when the pressure goes above a user-set threshold, when the pressure stays too low for a certain amount of time, or if the breathing cycle stops. This audible alarm, coupled with screen messages explaining the cause for the alarm, alert staff to check on the patient and adjust the ventilator. The device would allow some of these basic ventilators to be useful in case of a shortage.

To make sure it would work and be robust enough, Marti reached out to his former advisor Jun Ye, a physicist at JILA at CU Boulder, for help. That seems like an odd partnership, but it actually makes a lot of sense, Ye said. Physicists are accustomed to building ad hoc sensors for their experiments to detect minute changes in the environment. The Ye Group works on optical atomic clocks, which uses lasers and atoms to measure time to the 18th digit. That requires monitoring numerous parameters that could affect an atom on a fine scale, which isn’t that different from monitoring vital signs from a patient, Ye and Marti pointed out.

“In some sense our lab has been doing that for many years. That sort of control is our game, being able to make a system perform in a robust way,” Ye said. “The sense of urgency was like a life or death matter. At that time there was a super shortage of ventilators nationwide. A single day can lose life, so we were moving quick.” 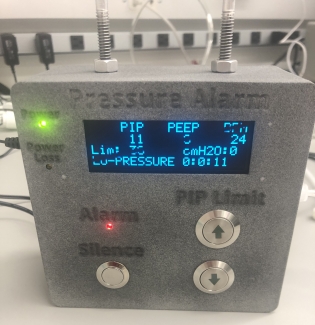 CZ Biohub reached out to JILA's physicists and research engineers to design the electronics for a ventilator alarm. This alarm would allow more basic ventilators to be used by hospitals in the event of a COVID-19 outbreak.

Ye called on Ross Hutson, a graduate student in his lab, and research engineers Terry Brown and Felix Vietmeyer in JILA’s Electronics Shop to review and modify the electronics design for the ventilator alarm and to design an actual electronic board for layout. In some ways, the measurement itself was easier than what they normally do, Felix pointed out; the device was measuring in seconds, not nanoseconds, for example. It was also the first time they had worked on something that would be used outside a physics lab.

“In a lot of cases we’re making stuff that there’s no market for, often because experiments at JILA have extreme requirements on precision,” Vietmeyer said. “It was a good experience to get to know a different crowd of people. We’d be happy to do more of that…there’s a lot of things that we can learn, while there's plenty of things we at JILA do really well and can contribute.”

During a frantic week at the end of March, the Biohub and JILA teams communicated almost daily as the JILA team worked on the electronics and the Biohub team on the enclosure, user interface, and software. On a few of those days Hutson worked through the night to complete the printed circuit board design that was sent to the Biohub. At the end of it all, the Biohub was able to build 22 ventilator alarms, which they handed off to the San Francisco VA hospital after a few weeks of intensive testing. The hospital will only be allowed to use the alarms under an IRB-approved protocol, in case of a surge in patients in need of ventilators.

Thankfully, those alarms haven’t been needed yet. However, the experience has gotten Ye’s group thinking about how they can use their expertise measuring and studying nanoscale objects to work understanding novel coronavirus. The collaboration shows that to tackle an unprecedented pandemic, every scientific discipline needs to work together.

“It shows what physicists can do. This is something that really is in our wheelhouse, and it’s a strength that we bring to the world,” Marti said.