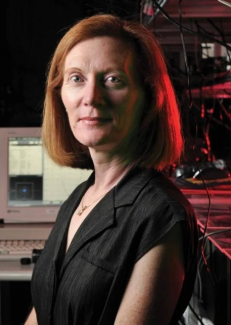 JILA Fellow Margaret Murnane has been selected as a recipient of the 2022 Institute of Physics Isaac Newton Medal and Prize. This prestigious award honors the legacy of the famous physicist Sir Isaac Newton, by commending those who have made world-leading contributions in the field of physics. Murnane received the award for pioneering and sustained contributions to the development of ultrafast lasers and coherent X-ray sources and the use of such sources to understand the quantum nature of materials. Murnane is a Fellow of the American Physical Society and the Optical Society of America. In 1997 she was awarded the Maria Goeppert-Mayer Award of the American Physical Society, in 2000 she was named a John D. and Catherine T. MacArthur Fellow, in 2004 she was elected to the National Academy of Sciences, and in 2006 she was elected a Fellow of the American Academy of Arts and Sciences. In 2021, she was awarded the Benjamin Franklin Medal in Physics, which she shared with her husband and fellow researcher at JILA, Henry Kapteyn.

The 2022 Institute of Physics Isaac Newton Medal and Prize is the latest accolade for Murnane, showcasing her genius and incredible work in advancing knowledge within physics. All award winners for this prize will receive £1,000 and a certificate, as well as an invitation to lecture at the Institute. “l am surprised, humble and grateful at the news,” said Murnane. “Through physics, I have made so many wonderful friends, met my life partner, and worked with amazing students and collaborators from all over the world.”

Find out more about the prize at this link.