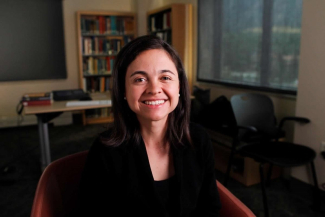 In the early 1990s, a student who would become one of the leading theoretical physicists of our time was completing her high school physics homework. Suddenly an explosion shook her family home in Bogotá, Colombia's capital city. Her windows vibrated, and Ana Maria Rey realized a bomb had detonated close to her apartment. The target was a nearby police station. Car bombs were common during the decades of conflict between the Revolutionary Armed Forces of Colombia joined by Colombia’s drug cartels and the Colombian government. Terrorism gripped the city for many years. Some incidents, like the 1985 Palace of Justice siege and the 1993 bombing of the Centro 93 shopping mall, made world headlines. Rey and her school friends grew up terrified to go to shops, movies or restaurants. Everywhere they went, the Rey family had to open the trunk of their car so the police could check for explosives. Despite the looming threat of terrorism, Rey managed to escape the madness, immersing herself in her schoolwork.

Read more of the article on Rey's life and work at this link, written by Optica.