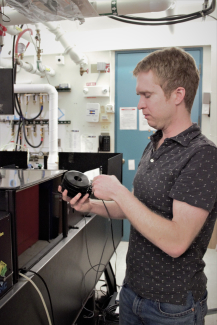 Surrounded by some of the world’s most advanced lasers, computers, and microscopes sits Brendan McBennett, a graduate student at JILA. McBennett has been working in the laboratories of JILA Fellows Margaret Murnane and Henry Kapteyn, as part of the KM group since 2019, excited to see his research advance significantly over that time. “We use ultraviolet and extreme ultraviolet (EUV) lasers to study heat flow in nanostructured materials,” McBennett states. “EUV photons have a higher photon energy that makes them insensitive to electron dynamics in most materials, combined with nanometer wavelengths. This allows them to very precisely probe surface deformations induced by heat - or thermal phonons – to capture new materials behaviors.” In simple terms, McBennett is looking at heat dissipation in nanoelectronics. “Our experiments are providing a better understanding of phonon thermal transport in nanomaterials to inform the development of new predictive theories,” he says. “The field of phonon transport is still in its infancy, compared to our understanding of electrons and spins. There is a lot of technological potential, for energy efficiency, smarter design of nanoelectronics and quantum devices, and phonon-photon and phonon-electron analogs like phononic crystals and thermal diodes.” McBennett’s previous work at NREL (National Renewable Energy Laboratory) studied the power grid under varying renewable energy and energy efficiency scenarios, and his current research zooms in on this previous focus.

As part of the KM group in JILA, McBennett enjoys the community within his small team. “We have a close-knit team of four, with three experimentalists and a visiting theorist, and several collaborators from other universities, national labs and industry. We share many good discussions and lots of collaborative work,” he says. “We work very closely with theory groups all over the world, and there is a great deal of back and forth discussions to design new models based on our new experimental data.” He also enjoys the time outside of the laboratory spent with fellow researchers. “We’ve been excited to plan more events as the team has grown,” he adds. “From the Phonon Club lecture series this year to group dinners, and a hockey game. I’m grateful to my advisors Margaret and Henry for creating such an excellent work environment within the KM group. It’s immensely helpful to always be able to go down the hall and work with the imaging, magnetic, and ARPES teams to solve challenges as they come up in the lab and exchange ideas.”

As a JILA researcher, McBennett is also appreciative of the resources that JILA offers to its scientists and students, including the machine and instrument shops, the computer shops, the clean room, and more. “I can’t stress enough how grateful I am to the Keck Lab and machine shop, particularly Curtis Beimborn, for making much of our research possible.” McBennett explains “There are many instances from quickly checking something in the microscope to AFM and even electron beam lithography where working in the Keck lab has vastly sped up our research.” Other researchers in JILA have echoed these sentiments, grateful to have the unique resources that only JILA provides.

“JILA has taught me how to do collaborative research and work effectively in a large, dynamic, and diverse group of highly motivated and creative scientists,” McBennett says about the importance of JILA in his career. “I think it’s a great philosophy on how to do really high-quality research.” As JILA is a unique institution, being half university and half government, it does offer one-of-a-kind opportunities that researchers like McBennett are able to take advantage of. As he explains: “JILA has an excellent combination of exciting research and fantastic professors, students and staff who collaborate to make the work we do here possible. Everyone is extremely approachable, and there are many talks and events at which to meet your fellow JILAns. It is also exciting to work at an institute balanced between a university and national lab setting, with many connections to the private sector. It’s possible to imagine all sorts of interesting career paths after completing your graduate work at JILA.”