“BEC’s in Space” Now a Reality 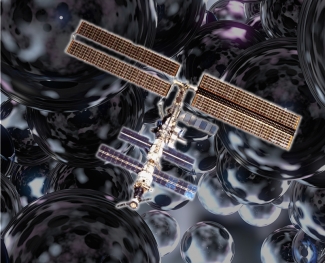 This new acheivement is "multi-mega-awesome," according to JILA Fellow Eric Cornell. BECs became a staple for measuring quantum phenomenon when they were experimentally realized in 1995 by JILA Fellows Eric Cornell and Carl Wieman at the University of Colorado Boulder, and by Wolfgang Ketterle at MIT.

Here on Earth BEC experiments are plagued by the constant tug of gravity. To prevent a BEC from smashing into Earth, all Earth-bound BEC experiments must tightly confine the condensate, in either laser-based or magnetic traps.

But in a microgravity environment, like that of the International Space Station, the pull of gravity is lessened. This allows condensates to forgo typical confinement, resulting in longer lifetimes of up to 10 seconds (much longer than the fraction of a second that Earth-bound BEC’s are stable for). These long lifetimes will allow space BEC’s to achieve much lower densities, and therefore much lower temperatures, than their Earth-bond counterparts.

To generate BEC’s on the international space station, NASA’s Jet Propulsion Laboratory launched CAL, a remotely operated Cold Atom Laboratory. At the heart of CAL is a vacuum chamber ("about the size of a stick of butter," says Science) and atom chip built by JILA Fellow Dana Anderson's company, ColdQuanta. Anderson’s chip helps cool and trap the atoms, all necessary steps to generating a BEC.

Supplies to build the laboratory were launched this past May. CAL confirmed this July that BEC’s of Rubidium-87 have been created, but they are still working to generate BEC’s of both Potassium-39 and Potassium-41.