Warm Side of the Force 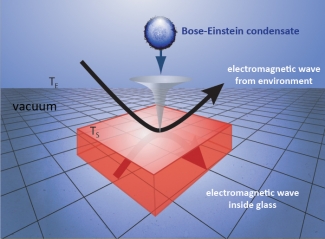 Small changes in the quantum fluctuations of free space are responsible for a variety of curious phenomena: a gecko’s ability to walk across ceilings, the evaporation of black holes via Hawking radiation, and the fact that warmer surfaces can be stickier than cold ones in micro- and nanoscale electromechanical systems (MEMS and NEMS). The tendency of tiny parts to stick together is a consequence of the Casimir force.

A related attractive force, called the Casimir-Polder force, occurs between an atom and a surface. The temperature dependence of this force was recently measured for the first time by graduate students John Obrecht and Robert Wild and Fellow Eric Cornell. Colleagues from the Università di Trento in Italy contributed theoretical calculations to their efforts.

To measure the temperature dependence of the force between an atom and a surface, the researchers positioned a Bose-Einstein condensate (BEC) of 250,000 rubidium atoms (in a magnetic trap) a few microns from a glass plate. As they moved the BEC closer to the plate, they were able to measure changes in the frequency of normal oscillations of the BEC and calculate the Casimir-Polder force. Doubling the temperature of the plate from 310 to 605 K resulted in a threefold increase in the force. 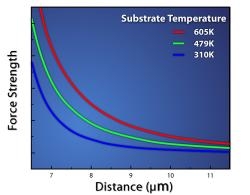 Colored curves show that raising the temperature of a glass surface increases the strength of the Casimir-Polder force. Credit: John Obrecht and Greg Kuebler

The key to their success was doubling the temperature of a glass plate while keeping the plate’s surroundings near room temperature. The researchers accomplished this by using a laser to selectively heat the fused silica surface. This strategy allowed the researchers to experimentally measure one of two thermal processes that contribute to the Casimir-Polder force. These processes have opposing effects on the size of the force.

When the laser heated the silica surface, it increased the electromagnetic waves inside the plate, which mostly remained inside the glass. However, a few evanescent electromagnetic waves leaked out through the surface and strengthened its attractive force. This attractive surface force enhanced the Casimir-Polder force emanating from the free space surrounding the plate. It is also what made the “warm glass stickier than the cold glass,” according to Cornell.

However, if the temperature of the rest of the apparatus had also been doubled, more electromagnetic waves from the surroundings would have reflected off the surface. These reflected waves would have created a repulsive force at the plate’s surface, which would have nearly cancelled the attraction due to the glass’s thermal force. The figure here shows the two types of electromagnetic-field fluctuations that drive the Casimir-Polder force.