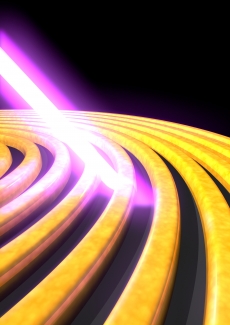 The world’s most powerful CDI (Coherent Diffractive Imaging) microscope at a wavelength of 13 nm­­. Remarkably, it contains no lenses. Rather, a nanoscale object is illuminated with coherent high-harmonic beams of extreme ultraviolet light. The scattered light is collected and used with a powerful algorithm to create an image of the object with sub-wavelength spatial resolution.

Dennis Gardner and his coworkers in the Kapteyn-Murnane group accomplished two major breakthroughs in imaging tiny structures much too small to be seen with visible light microscopes: (1) for the first time in the extreme ultraviolet (EUV) or soft X-ray region, they achieved a resolution smaller than the wavelength of the light; and (2) for the first time, they obtained high resolution quantitative imaging of near periodic tiny objects (structures with repetitive features).

To accomplish these breakthroughs, the team used coherent diffractive imaging (CDI), which amazingly does not require any optical components such as lenses or mirrors. At EUV wavelengths, optical components are difficult to make and typically cause substantial loss of EUV light. The team also surpassed results typically available only at enormous and expensive research facilities, such as synchrotrons and free electron lasers, by using only tabletop lasers and imaging systems. EUV imaging can provide simultaneous information about chemical composition as well as structure, crucial to understanding nanoelectronic devices, advanced materials, and biological samples. The Kapteyn-Murnane group has just made EUV imaging potentially more powerful using imaging systems orders of magnitude smaller and less expensive than the previously required synchrotrons and free electron lasers.

The Kapteyn-Murnane group’s CDI technology provides a new tabletop imaging capability that is complementary to scanning electron microscopes, but without having to bombard the object with potentially damaging high-energy charged particles. To image with such high resolution, it is necessary to use light with wavelength shorter than the size of the object being imaged. In this case, the researchers used light in the EUV region of the electromagnetic spectrum. This work shows that, with the right type of illumination, i.e., an EUV laser beam, previous limitations of X-ray microscopy can be overcome. This breakthrough will be critical for imaging and designing the next generation of nano-engineered devices.

The secret of making CDI work well began with innovative basic research on high-harmonic generation (HHG) in the K/M group for more than 20 years. In HHG, a strong laser field rips an electron from an atom such as argon or some other noble gas. The electrons then smash back into these atoms in a way that retains their coherence and produces coherent EUV or soft-X-ray beams. This process is essentially a quantum version of the ubiquitous X-ray tube.

Getting the highest resolution CDI images requires very stable illumination for a coherent microscope. Fortunately, KMLabs had recently developed a robust tabletop device that reliably produces ultrastable coherent beams with a 13.5 nm wavelength. This EUV light has a wavelength about 50 times shorter than that of visible light.

KMLabs allowed JILA to test the newest version of its device in a research project to produce the sharpest images ever. The device made it possible for the JILA-KMLabs team to create the first sub-wavelength spatial resolution X-ray microscope from any light source––whether tabletop scale or in a large facility. Consequently, CDI is revolutionizing X-ray imaging, because it is simple to implement and extremely powerful––almost magical.

One simply shines an EUV or X-ray laser onto an object, which scatters the light and creates a speckle pattern. By directly recording this speckle pattern and then using a computer algorithm, the computer constructs an image. This technique is well suited for X-ray microscope because X-ray lenses are not only very expensive, but also don’t work very well. In contrast, CDI has much better resolution because there are no lenses between the sample and the detector––thus the image is distortion-free.

At JILA, the K/M group used a CDI technique called “ptychography” in which multiple diffraction patterns were collected using a detector to record the scatter from overlapping areas of the sample. This technique provided enough information for the computer algorithm to reconstruct the amplitude and phase of the light coming off the sample plus the amplitude and phase of the focused beam that illuminated the sample.

The result was the highest resolution ever measured for a tabletop-scale microscope using light, rather than electrons, for illumination. This is a particularly important advance because electrons cannot be used to image many types of samples because of the accumulation of charge and sample damage.