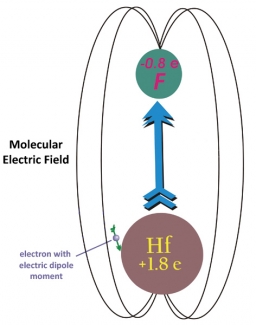 Does the electron have an electric dipole moment (eEDM)? If it does, the standard model of elementary particle physics says this dipole moment is many orders of magnitude below what can be measured experimentally. As Fellow John Bohn quips, "It's a darn small one."

On the other hand, various extensions of the standard model predict a much larger eEDM that might be just within reach of a cleverly designed experiment. That tantalizing idea has induced Fellow Eric Cornell to collaborate with Bohn on a multiyear project to try to measure the eEDM in ultracold trapped molecular ions. If the researchers succeed in detecting an eEDM, they will show that running time forward or backward at the quantum level makes a difference in the behavior of individual particles.

Recently, Bohn, a theorist, and graduate students Ed Meyer and Mike Deskevich decided to try and figure out good candidates for the proposed experiment, which will use high-precision spectroscopy to search for an eEDM signal in ultracold trapped molecular ions. Before they started their analysis, the theorists knew they needed to find ions consisting of two atoms capable of creating a huge effective electric field on the ions' valence electrons - a much bigger field than would be possible to apply in the lab. This criterion meant that one atom in a candidate ion had to be large and heavy.

The researchers also knew the experimentalists would need to be able to use a small applied electric field to precisely align the internal electric fields of their trapped ions. This requirement meant that the unpaired, or valence, electron in a candidate ion had to have a high angular momentum around the molecular axis. However, such a high angular momentum would naturally keep that electron far away from the nucleus. But, a valence electron has to be fairly close to the nucleus to experience the big electric field between the ion's atomic constituents. At this point, the theorists muttered, "So now what?"

Undaunted, they decided to look for molecular ions with two unpaired electrons, one with no angular momentum and the other with lots of it. In the process, they figured out that the candidate ions would need to exhibit these characteristics in the ground state (or a long-lived metastable state) so they would last long enough to be probed. The good news is that they found two good candidates, hafnium hydride (HfH+) and platinum hydride (PtH+).

Before they could even publish their results, the Cornell group asked them to evaluate the hafnium fluoride (HfF+) ion because the experimentalists thought it might be easier to make and observe in the lab. HfF+ whizzed through the theoretical evaluation with flying colors — in time to make it into print with the two hydrides. So now the experimentalists have the ball, and they're off and running. Stay tuned.   - Julie Phillips