Coming Soon to a Precision Measurement Near You 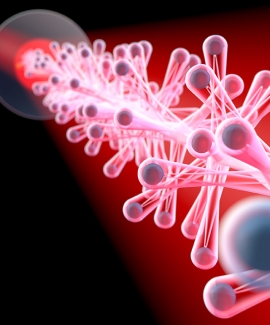 The use of laser light in an optical cavity improves precision measurement by reducing the quantum fuzziness of 500,000 Rb atoms by a factor of 10. In the process, the laser light entangles hundreds of the atoms.

The spooky quantum property of entanglement is set to become a powerful tool in precision measurement, thanks to researchers in the Thompson group. Entanglement means that the quantum states of something physical—two atoms, two hundred atoms, or two million atoms—interact and retain a connection, even over long distances.

Even without exploiting entanglement, atoms are already used as exquisite sensors of time, gravity, rotations, and magnetic fields because the rules of quantum mechanics allow them to be prepared in identical states. However, this identicalness comes at a price. Even individual identical atoms are fundamentally fuzzy because of how things work in the quantum world. It’s as though the hands of your clock were blurry, making it difficult to precisely tell the time. What’s worse, no amount of squinting makes this quantum blurriness go away.

What the Thompson group has done is to figure out how to create the right kind of “eyes” to measure the quantum fuzziness in 500,000 rubidium (Rb) atoms and reduce it by a factor of 10. This exciting result was the largest directly observed measurement enhancement due to entanglement ever reported for atoms. It appeared online in Nature Photonics this week. The research team responsible for this work included recently minted Ph.D. Justin Bohnet, graduate students Kevin Cox, Matt Norcia, and Josh Weiner, recent JILA grad Zilong Chen, and Fellow James K. Thompson.

One way to think about this experiment is that a measurement  “squeezes” the quantum noise. Squeezing means that the researchers were able to design the measurement technique to preferentially force quantum noise out of the width of their quantum clock hand and into its length instead. A narrower clock hand allows one to read the clock more precisely. At the same time, more noise in the length has no bearing on a measurement of time.

The reason squeezing works is because the Thompson group’s measurement of quantum fuzziness entangles the atoms. In a large entangled state, the fuzziness of each individual atom is partially cancelled by the fuzziness of other atoms. As a result, the overall fuzziness of all the entangled atoms is reduced. So, if precision measurement specialists entangle independent atoms, there are clever ways to make them work together. And when they work together, they can become a clock with higher precision than would be possible if all the atoms were separately trying to measure the exact time (as well as length, or another physical quantity).

The Thompson group was able to make an entangled collection of atoms by allowing all the atoms to interact with the same laser light many times by bouncing the light back and forth between mirrors prior to measuring the orientation of the clock arrows, or atomic spins. The information carried by the laser light told the researchers about the quantum state of all of the atoms, but without telling them the quantum state of any single atom. That’s because very little light with information about the state of individual atoms comes out sideways from the laser cavity (shown as yellow and blue squiggles in the picture). The strategy of just measuring the state of all the atoms allowed every atom to remain in a quantum superposition of both pointing up and down simultaneously. Keeping the atoms in this state was the key to generating entanglement.

In the quantum world, measurements are usually associated with destroying entanglement. But, now the Thompson group has shown that the right type of measurement can actually produce large amounts of entanglement.

“This was the first time anyone has actually gone in and directly observed a factor of 10 improvement over the original quantum fuzziness of atoms,” said Thompson. “This is a lot of entanglement. And, it is what we actually see without correcting for any imperfections in the experiment. We also think that we can build even better eyes in the future to generate even more entanglement.”

Thompson predicts that this new work means that entangled states will soon be coming to a precision measurement near you.—Julie Phillips and James K. Thompson