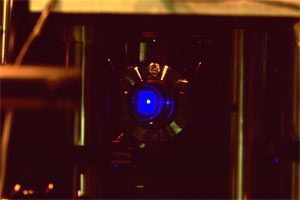 Photograph of a better atomic clock.

There's only one way to prove you've invented a better atomic clock: Come out on top of a comparison of your clock with one of the world's best atomic clocks: The NIST-F1 cesium fountain atomic clock, the nation's primary time and frequency standard. NIST-F1 is so accurate it won't gain or lose a second in more than 60 million years.

In the first test of the new clock (shown below right), Ludlow and his colleagues found that it won't gain or lose a second in more than 600,000 years. They hope to increase its accuracy tenfold by the next test, so that the clock will neither gain nor lose a second in more than 10 million years. These are very promising results for relative newcomers in the primary atomic clock business. Jim Bergquist's optical clock team (in NIST-Boulder's Time and Frequency Division) produced the first optical atomic clock based on a transition of a single mercury (Hg+) ion in 2001. The newest single-ion clocks, using either Hg+ or aluminum (Al+) ions, show the best time-keeping performance ever measured, neither gaining nor losing a second in a billion years. National laboratories around the world are studying similar devices.

In 2002, Leo Hollberg's team in the Time and Frequency Division developed an optical atomic clock based on cold neutral calcium (Ca) atoms in free fall. Meanwhile, Tetsuya Ido and Hidetoshi Katori at the University of Tokyo and Jeff Kimble's group (where Jun Ye was a postdoc) at Caltech independently proposed that precision measurements could be made inside an optical trap since such traps don't affect transition frequencies. In 2003, Katori's group proposed optical atomic clocks based on transitions in neutral atoms held inside optical lattices. Ye's group immediately began working on a lattice-based Sr clock. Recently, Leo Hollberg's group started a similar project using ytterbium (Yb). National laboratories in Canada, the United Kingdom, and France signed on to the idea, too. By 2005, the race to produce the world's best optical atomic clock was at full throttle.

The strong collaboration between Ye's group and the Time and Frequency Division at NIST-Boulder is helping local researchers rapidly improve their optical atomic clocks. Collegial communications also continue with optical atomic clock groups around the world. The friendly rivalry among research groups is giving everyone a better chance to prove that his/her strategy holds the greatest promise for creating the most stable, accurate optical atomic clock. Jim Bergquist estimates it will be about five years before the scientific community reaches consensus on the winning optical atomic clock technology.

The Ye group's most recent progress in the race against time was reported in the January 27, 2006, issue of Physical Review Letters.   - Julie Phillips