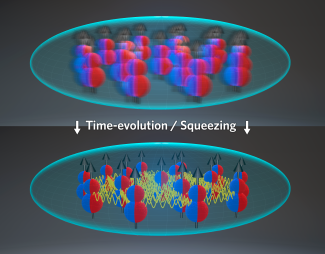 Model of the quantum gas pancake with quantum interactions

Within the realm of quantum mechanics, the generation of quantum entanglement remains one of the most challenging goals. Entanglement, simply put, is when the quantum state of each particle or a group of particles is not independent of the quantum states of other particles or groups, even over long distances. Entangled particles have always fascinated physicists, as measuring one entangled particle can result in a change in another entangled particle, famously dismissed as “spooky action at a distance” by Einstein. By now, physicists understand this strange effect and how to make use of it, for example to increase the sensitivity of measurements. However, entangled states are very fragile, as they can be easily disrupted by decoherence. Researchers have already created entangled states in atoms, photons, electrons and ions, but only recently have studies begun to explore entanglement in gases of polar molecules.

“Molecules are very appealing for quantum simulation, quantum information, and precision measurements,” explained Dr. Ana Maria Rey, a University of Colorado Boulder Adjoint Professor of Physics and JILA Fellow. The reason is that molecules have a large number of internal degrees of freedom that can be a useful resource for quantum sensing and fundamental physics tests. Another benefit of using molecules in quantum experiments is that molecules also have long-range dipolar interactions: in contrast to atoms which have to bump into each other to interact, molecules can interact at a distance. “Molecules offer really great advantages compared to atoms, but at the same time, they are really hard to cool down. In fact, cooling molecules to quantum degeneracy (condition reached when they are cold enough to make quantum effects dominate) has been one of the most sought-after outstanding goals for many years. The progress has been very slow, but it’s happening now.”

In 2019 JILA Fellow and Adjoint professor for University of Colorado, Boulder, Jun Ye, finally achieved this important milestone. Ye’s lab managed to cool down molecules consisting of one rubidium and one potassium atom down to quantum degeneracy and observe their quantum nature. More recently, he has been compressing this molecular gas into a stack of pancake shaped arrays. The work by the Rey’s and Ye’s groups investigates the exciting new physics that emerges due to dipolar interactions in such pancake shaped arrays.

The Importance of Pancake Geometry

Chemical reactions are one of the most detrimental enemies to cooling molecules. A few years ago, the Ye lab was able to avoid chemical reactions while allowing molecules to interact with each other via dipolar interactions by loading the molecules in a 3D lattice. A 3D lattice can be imagined as a perfect crystal of light. In a 3D lattice molecules are pinned at individual lattice sites without moving. The molecules then interact via dipolar interactions in the same way that magnets interact: when they are placed side by side they repel and when they are placed head to tail they attract. In a 3D lattice, molecules experience both attractive and repulsive interactions and as a consequence on average the interactions between molecules cancel each other out. Moreover, in the 3D lattice experiment the molecular filling fraction was very low, which is to say that the molecules were mostly quite far apart and interacted only very weakly.

In a recent experiment, however, the Ye group was able to increase the density by compressing a 3D quantum degenerate gas into a few pancakes, each one with a flat 2D shape. Within a pancake the Ye group found it is possible to suppress undesirable chemical reactions and in addition make dipole interactions stronger. This is because in a 2D configuration all molecules repel and the interactions do not average out. The exciting observation made by the investigators is that the strong dipolar interactions in the pancake can also make the gas robust to undesirable dephasing effects and chemical reactions. Bilitewski stated: In studying this shape, “conceptually, and this is at the heart of this work, the interactions between the molecules depend on the quantum states they are in, and thus on this confinement. So, you first have to figure out the interactions in this new geometry. It turns out these actually have very beneficial properties for generating the collective dynamics we are after.” But the even better news is that interactions not only protect the state by forcing the molecular dipoles to be all aligned, but also naturally create entanglement. In Bilitewski’ words: “the benefit to this collective synchronization is that the entanglement we generate becomes robust to certain effects that would usually destroy is.” Such entangled arrays of molecules could have applications for future measurements of various quantities, such as electric fields, with sensitivity enhanced by the entanglement.

The work done by the Rey group illustrates the importance of geometrical effects in dipolar gases and the exciting many-body phenomena yet to be explored once molecules are brought to quantum degeneracy. In theorizing about the importance of this 2D shape, Rey said: “thanks to the amazing work done by Thomas Bilitewski, we have been able to model their quantum dynamics and show it should be possible to entangle them, he computed all the integrals needed to write an effective model, solved the equations of motion and showed everything can be made to work out to generate entanglement through flip-flop processes induced by dipolar interactions.”

The production of ultracold molecular gases in controllable geometries hints at new discoveries and predictions within the field of quantum mechanics. “This observation was a demonstration that molecules can explore quantum magnetism,” Rey added, “In other words, the molecules can behave as quantum magnets and emulate the behavior of electrons in solids, for example. In our recent work, we have made a step forward toward this direction.” The proposal put forth by the Rey and Ye groups is only the beginning of all the great science yet to be studied with entanglement arrays of molecules. According to Bilitewski: “this is all really exciting in the sense that we are exploring a novel regime that has only now become available in the lab.”

You can read the full paper here in Physical Review Letters. Published on March 17,2021

Entangled particles have always fascinated physicists, as measuring one entangled particle can result in  a change in another entangled particle, famously dismissed as “spooky action at a distance” by Einstein. By now, physicists understand this strange effect and how to make use of it, for example to increase the sensitivity of measurements. However, entangled states are very fragile, as they can be easily disrupted by decoherence. Researchers have already created entangled states in atoms, photons, electrons and ions, but only recently have studies begun to explore  entanglement in gases of polar molecules.