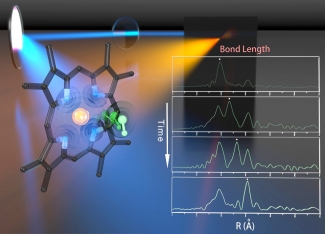 Ralph Jimenez and a team at NIST break a molecular bond in CO-heme (Carbon-monoxy- iron protoporphyrin IX) with a laser. They then use X-rays to watch how the electron configurations and bond lengths change, with a time resolution of < 6 picoseconds. The combined frames from a movie of sorts, depicting the real-life drama of everyday molecules. Credit: Jimenez Group and Brad Baxley, JILA

The actors are molecules. The plot, broken molecular bonds. JILA Fellow Ralph Jimenez and a team of detector experts at the National Institute of Standards and Technology (NIST) are working together to make X-ray movies of a molecular drama.

The team at NIST built a microcalorimeter X-ray spectrometer capable of performing time-resolved spectroscopy; in other words: a camera to film molecules. They use this camera to learn how molecules break their bonds – do the ­electrons rearrange, do the other atoms quake?

The microcalorimeter spectrometer is not the only tool that can film molecules, but it is the smallest. Previously, only huge, multibillion dollar synchrotrons were capable of producing X-rays and probing molecules. Beam time at these facilities has to be reserved in advance, sometimes months, or even years. These long wait times, combined with the expense of building and operating synchrotrons, can limit opportunities for new research.

In contrast, NIST’s spectrometer fits on a tabletop and costs a fraction of an entire synchrotron system. But most importantly, NIST’s spectrometer is easily accessible ­­– it’s like having the ability to film a Hollywood movie on your smartphone. Jimenez hopes that this new device will “broaden access and enable a wider range of molecules to be studied.”

Despite its small size and modest cost, the NIST spectrometer is faster and more efficient than previous systems. The new spectrometer combines ultrafast X-ray pulses with an array of cryogenic microcalorimeter detectors. The microcalorimeter detectors are superconductors held at their transition temperature, where the resistance is maximally sensitive to temperature. When one of the superconductors absorbs an X-ray photon, it’s temperature is raised, and the energy of the X-ray photon can be deduced from the change in resistance. This enables the microcalorimeter array to count individual emitted X-rays and simultaneously measure their energies.

While a fascinating tool, you can’t make a movie without actors. Jimenez is the casting director of the experiment, and writes the leading roles into the scripts. But not every molecule is charismatic enough for the big screen. “[I] tell them the reality,” said Jimenez, “what science you can actually do with the system.”

Jimenez worked tirelessly to find a worthy molecule, considering “how much light it absorbs, signal to noise, structure change … if we broke this bond, would it give a large enough signal? We can’t just pop a molecule in the experiment and see it.” So far, all of the molecules have had a metal atom.

The film begins rolling after the film crew breaks a molecular bond with a laser. The crew then blast that same laser onto a material to create a plasma (a gas of free electrons). The free electrons collide into each other, causing them to emit X-rays. The result in an X-ray light bulb that glows over a fairly broad range.

When the X-ray lightbulb shines over the newly broken molecule, it excites transitions in the core electrons of the metal atom. The timing between when the molecule breaks and the X-rays probe can be delayed with picosecond resolution (trillionth of a second). “And that’s the kind of resolution you need to see molecular motions,” said Jimenez.

Depending on the state of the core electrons, a specific energy of X-rays is absorbed by the metal atom in the molecule. This absorption spectrum can then be analyzed to determine the electronic state of the metal atom, and the positions of the other atoms in the molecule. This means that the team can see whether the electrons move around before a bond breaks, and watch the other bond lengths change. These measurements are repeated with picosecond time resolution, and the combined frames create a molecular movie.

With their setup, the NIST team has already made two new films. One film, documenting a bond breaking in a ferrioxalate complex, settled a controversy in the literature about the important atmospheric chemistry reaction. Because molecules with heavy atoms, such as a ferrioxalate complex, have multiple oxidation states, they are useful for storing both energy and data. Filming how these molecules react to chemical changes can help develop more energy-efficient batteries, computer memories and optical display technologies.

With a couple of molecular movies under his belt, Jimenez’s casting is ready to move from high school drama kids to Hollywood hotshots. “We [plan to] do in vitro measurements of purified proteins… we’re going to try it this fall.”

Filming proteins no easy task. Proteins are much larger than the previously filmed molecules. And, as anyone who has had a medical X-ray knows, human bodies, and the proteins they are made of, are mostly transparent to X-rays.

But Jimenez is not one to back down from a challenging experiment. “I think everyone who was on the team said, ‘these were the hardest experiments we’ve ever done.’"