A Magic Recipe for a Quantum Interferometer 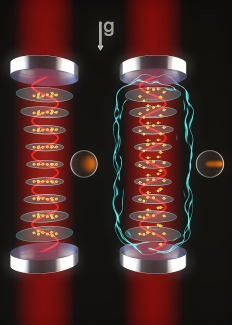 A comparison of two optical cavities, with the left cavity having only localized atoms and no squeezing. In contrast, the right cavity depicts delocalized atoms, squeezing and entanglement.

Gravimetry, or the measurement of the strength of a gravitational field (or gravitational acceleration), has been of great interest to physicists since the 1600s. One of the most precise ways to measure gravitational acceleration is to use an atom interferometer. There are many different types of atom interferometers but so far all operate using uncorrelated atoms that are not entangled. To build the best one allowed in nature requires harnessing the power of quantum entanglement. However, making a quantum interferometer with entangled atoms is challenging. JILA Fellows Ana Maria Rey and James K. Thompson have published a paper in Physical Review Letters that discusses a new protocol that could make entangled quantum interferometers easier to produce and use.

A Mismatch in Cavity and Lattice

Entangled atoms, atoms prepared in a way that the quantum state of each atom cannot be described independently of the state of the others, are useful to measure accelerations more precisely. This is because such quantum correlations help to suppress the quantum noise present in arrays of uncorrelated atoms. But producing entangled atoms is easier said than done. Entangled atoms are quite fragile, and can be disrupted easily, making them difficult to use in an interferometer.

The experimental design that many researchers use to generate entangled atoms is a combination of two elements: a lattice potential to trap the atoms and an optical cavity to couple the atoms and entangle them. This setup comes with many problems when utilized in applications with interferometers. According to Rey: “The problem is that because of the mismatch between the cavity and lattice wavelengths, the generated entangled state has different phases at different positions. As such if atoms are released from the lattice, as a part of the interferometer sequence, they experience the different phases and the utility of the entanglement disappears."  Atoms in these different phases experience different levels of entanglement, and therefore, the entanglement is no longer uniform—the atom-light couplings are inhomogenous.  Rey continued, "One possible solution is to engineer a lattice wavelength commensurate with the cavity mode wavelength or allowing the atoms to move to generate homogeneous atom-light couplings, but these approaches can have their own challenges.” . Thompson added, “Wouldn’t it be awesome if we could just clever our way out of this?”

In order to "clever their way out of" the challenge of inhomogeneous atom-light couplings, the team of researchers, led by the graduate student Anjun Chu, investigated a new way to trap the atoms in the lattice within the interferometer. “Our goal was to propose a way to engineer uniform entangled states in a compact lattice-based interferometer,” Rey said. “Anjun did a lot of nice calculations, trying to figure out if there is a way we can do that. The way we found, after many hours of discussion with James Thompson's group, is that instead of using particles in a deep lattice that are localized, we can decrease the lattice depth and allow the atoms to partially delocalize.” This partial delocalization overcame the mismatch issue in earlier interferometer designs, and opened a route for building up a quantum interferometer operating with entangled atoms. According to Chu: “If we allow the atomic wave functions to extend over a few lattice sites, the inhomogeneity can be averaged out. This condition can be easily achieved in current cavity systems because the extension of the atomic wave functions can be controlled by the lattice depth.” “This is one of the most intriguing aspects of this proposal”, added Peiru. He, a former Rey student, was involved in this work. “The finite extension of the wavefunction, which seems to add undesirable motional decoherence at first sight, turns out to magically resolve the inhomogeneity problem.”

The benefit of this new protocol is its easy tunability. As the lattice is constructed from laser beams, the lattice depth can be finely tuned by controlling the intensity of the laser.  This in turn affects the delocalization of the particles, giving more control to researchers, as well as a boost in sensitivity. Rey added that: “In our proposed protocol, the advantage is that we don't have to build extra stuff in the experiment to make the system uniform, we just need to control the lattice depth. In other words, the inhomogeneity can be finely tuned by adjusting the laser intensity.”  Thompson remarked, “In the experiment, we can adjust the lattice depth by just turning a laser power up and down, something so easy to do that we experimentalists can do it while asleep and with one hand tied behind our backs!”  This fine-tuning also gave a benefit to the researchers by removing the cavity wavelength requirements. As Rey mentioned, because the lattice depth is what needs to be adjusted, the cavity could be, theoretically, almost any size, which reduces the need to design custom cavities for this experiment. This allows for more applications of this new protocol.

Operating the interferometer with entangled particles also improves the required measurement time for a tiny signal. “In the absence of environmental noise or decoherence, a sensor would be able to measure forever. By measuring over a longer time you're going to get more signal and therefore, you're going to reduce your measurement uncertainty," said Rey. The problem is that in real life, decoherence is inevitable and therefore, your system can only measure for a certain amount of time. With this new protocol, the experiment can become more flexible in regard to time. “We have better sensitivity using quantum entanglement, so we actually do not need to wait for such a long time to achieve equal or better measurement results,” Chu explained. The enhanced sensitivity in a compact spatial volume could also be beneficial for researchers who are exploring forces at short distances, introducing new possibilities in researching for new science beyond the Standard Model of physics.

The JILA team believes this protocol can be applied to other fields. “This is a resource not only for interferometry, but also for quantum simulations, since it allows us to engineer a tunable amount of disorder in the coupling to the cavity when it acts as a communication bus to mediate spin-spin interactions,” Chu commented. For researchers studying quantum science, this protocol may be not only beneficial, but could lead to other important discoveries in this field. Thompson is already looking into ways of implementing this clever protocol in his laboratory.

Gravimetry, or the measurement of the strength of a gravitational field (or gravitational acceleration), has been of great interest for physicists since the 1600s. One of the most precise ways to measure gravitational acceleration is to use an atom interferometer. There are many different types of atom interferometers but so far all operate using uncorrelated atoms that are not entangled. To build the best one allowed by nature, it is required to harness the power of quantum entanglement. However, making a quantum interferometer with entangled atoms is challenging. JILA Fellows Ana Maria Rey and James K. Thompson have published a paper in Physical Review Letters that discusses a new protocol that could make entangled quantum interferometers easier to produce and use.