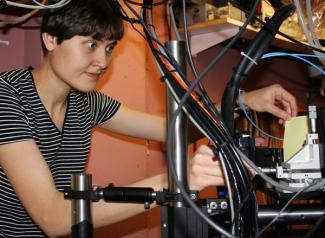 Zelevinsky and her apparatus.

"In the right light, in the right time, everything is extraordinary," according to photographer Aaron Rose. He could have just as easily been describing precision optical spectroscopy experiments recently conducted by Research Associates Tanya Zelevinsky and Tetsuya Ido, Graduate Students Martin Boyd and Andrew Ludlow, Fellow Jun Ye and collaborators from Poland's Instytut Fizyki and NIST's Atomic Physics Division.

Using precisely tuned laser light, Zelevinsky and her colleagues were able to induce a gas of ultracold strontium atoms (88Sr) to form stable molecules via nine slightly different electronic pathways. In so doing, they showed that optical Feshbach resonances can create ultracold molecules from ultracold 88Sr atoms without significant atom loss. Using light to catalyze molecule formation is important because 88Sr atoms don't have magnetic Feshbach resonances, which researchers use to induce the formation of other ultracold molecules. The use of optical Feshbach resonances should also make it possible to evaporatively cool 88Sr atoms to form a Bose-Einstein condensate. Zelevinsky is shown above working on the apparatus she used to create molecules with finely tuned laser light.

To make 88Sr molecules, Zelevinsky and her colleagues confined a cloud of a hundred thousand ultracold (2μK) 88Sr atoms in a one-dimensional "magic" wavelength optical lattice, which is a standing wave of far infrared-wavelength light. A standing laser light wave set up between two mirrors is shown schematically below. The standing wave traps two-dimensional "pancakes" of 88Sr atoms where the wave has its largest amplitudes (i.e., the antinodes). The optical lattice's wavelength (914 nm) is magic because it has no net effect on the transitions under study in the atoms or molecules trapped inside of it.

Once the atoms were trapped, Zelevinsky aimed a weak red laser (at 689 nm) at them, which induced formation of excited 88Sr molecules. After the molecules formed, they were released from the lattice. The remaining atoms were then analyzed and counted with a blue light pulse (461 nm).

The nature of the narrow transition in the 88Sr atoms stimulated by the red laser light made it possible for the researchers to detect nine excited molecular states with high resolution. It also favored the decay of the excited molecules into tightly bound and stable ground-state molecules. However, the researchers must still directly prove that a large population of ultracold molecules in the ground state was indeed formed.   - Julie Phillips

The work reported here appeared in the May 26, 2006, issue of Physical Review Letters