Some of the greatest discoveries are accidental. This story is no exception. 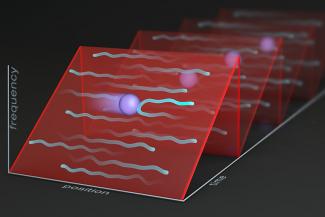 A JILA collaboration between the Thompson and Holland groups has produced a new laser cooling technique, dubbed SWAP cooling, that cools atoms faster than traditional methods. The technique ramps the laser frequency (red) in a sawtooth pattern. This ramping method permits atoms (purple) to slow not only when they absorb photons (cyan), but also when they emit photons. In Norciaâ€™s system, this technique quadrupled the cooling forces experienced by the atoms.

A large fraction of JILA research relies on laser cooling of atoms, ions and molecules for applications as diverse as world-leading atomic clocks, human-controlled chemistry, quantum information, new forms of ultracold matter and the search for new details of the origins of the universe. JILAns use laser cooling every day in their research, and have mastered arcane details of the process.

So it was a surprise when an accidental discovery in a JILA lab, coupled with new theory to explain that discovery, created an entirely new, more robust method of laser cooling, potentially advancing nearly all current JILA research using laser cooling, and opening new areas of research.

The new JILA laser cooling technique, dubbed SWAP cooling, uses stimulated emission, rather than spontaneous emission, to increase cooling forces. This new technique, detailed in a recent New Journal of Physics publication, is ideal for cooling atoms with narrow linewidth transitions, such as those with expansive frequency metrology applications (e.g., atomic clocks). The technique could also have applications for cooling molecules, which are difficult to cool via traditional laser cooling because they have many more internal states than atoms.

“If you undergo spontaneous emission [in a molecule] you can branch into states that are not cooled, or not trapped, and then you’ll lose those molecules,” explained Matt Norcia, former graduate student on the project, now postdoctoral researcher at JILA. But the control of stimulated emission, present in the new cooling technique, could keep the molecules from decaying into an invisible state.

Traditional laser cooling relies on a process called spontaneous emission. Atoms absorb photons from an oncoming laser, and this absorption slows the atom down, similar to how catching an oncoming baseball slows down a skateboarder. Slower atoms mean colder atoms, and the more photons caught, the colder the atom.

But an atom can only catch one photon at a time, and an atom must release a caught photon before it can catch a new one. This is where spontaneity becomes important. In traditional laser cooling, atoms drop photons spontaneously, meaning without any external encouragement.

This is where the new laser cooling technique differs, said Norcia. The new technique, dubbed sawtooth-wave­ adiabatic passage cooling, or SWAP cooling, provides atoms with external encouragement. This process, called stimulated emission, encourages atoms to throw photons in the same direction the atom is travelling. Similar to how a forward-moving skateboarder slows after throwing a ball forwards, stimulated emission in SWAP cooling also slows the atoms.

But this technique is not all stimulated emission. “Spontaneous emission is still very important for this mechanism, even though it’s role is reduced,” said Norcia.

Understanding the nuances behind spontaneity’s role in this new technique was John Bartolotta’s job, a JILA graduate student in the Holland group. According to Bartolotta, spontaneous emission acts as a fail-safe, without which SWAP cooling could easily lead to heating.

“When the velocity [of the atom] is too low, at that point, the time between the resonances just becomes arbitrarily small,” said Bartolotta.

What this means is, as the atom slows down, the window of time between when the atom can catch a photon, and throw a photon, shrinks (due to a frequency phenomenon called Doppler shifting). Because an atom can only throw a photon so fast, as an atom slows, the probability it will be left holding onto a photon increases. This is bad, because if the atom starts a new ramp cycle while still holding a photon, the atom will be encouraged to throw the photon backwards instead of forwards (due to Doppler shifts causing resonance with counter propagating lasers). And a backwards throw would cause the atom to speed up.

But spontaneous emission corrects this failure mode before it can derail the cooling process. If an atom fails to throw a photon forward via stimulation, that atom could drop the photon spontaneously. This would prevent the atom from starting a new ramp cycle with a photon, and overall prevents the system from heating, said Bartolotta.

In a soon-to-be-publishd article, Bartolotta calculated the efficiency of SWAP cooling for various initial parameters, including an atom’s linewidth, which is the inverse of how fast an atom will wait before spontaneously dropping a photon.

“If gamma [the linewidth] is very, very, very small, Doppler [traditional] cooling doesn’t seem like a good option, because you have to wait after every single absorption for it to decay,” explained Bartolotta. “Whereas here [with SWAP cooling], it actually gets better, and faster, and more robust if gamma is small.” This is why atoms with narrow linewidths, such as Alkaline-Earth metals, are ideal candidates for this cooling process, said Bartolotta.

This cooling technique is simple to implement in the lab. “Basically, I pressed a button on the function generator,” said Norcia, the experimentalist.

This function generator swept the frequency of the cooling laser, and the button Norcia pressed changed the shape of the sweep from triangular (ramp up, ramp down), to saw tooth (ramp up, slam down). “We stumbled upon this,” said Norcia of his discovery.

“If you think about it, it’s not too difficult of a system. It’s just a two-level system interacting with a laser,” mulled Bartolotta. “It is a nice, elegant problem, and it was surprising that it was so hard to make tractable.”

JILA experimentalists are already hard at work applying this technique to more technical cooling schemes. They have already seen promising results (to be published soon) along a Raman transition. And soon they hope to publish results of using this technique to create a 3D Magneto-Optical Trap of Strontium, said JILA Fellow James Thompson.