Lattice Light and the Chips 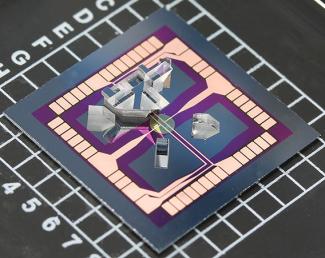 Compact and transportable optical lattices are coming soon to a laboratory near you, thanks to the Anderson group and its spin-off company, ColdQuanta. A new robust on-chip lattice system (which measures 2.3 cm on a side) is now commercially available. The chip comes with a miniature vacuum system, lasers, and mounting platform.

In the experiment at JILA, the Anderson group created a one-dimensional (1D) lattice with a laser beam reflected off the chip. The lattice was created by pin-head-sized mirrors directly bonded to atoms on the chip (at ColdQuanta).  As soon as the on-chip 1D lattice was ready, the investigators placed a tiny Bose-Einstein condensate (BEC) of rubidium atoms in the 1D lattice. The BEC was produced right on the chip!

The researchers soon observed atoms escaping from the on-chip 1D lattice via quantum tunneling, which is a signal that the miniature lattice was functioning properly. The researchers also determined that the optical-lattice chip technology could be readily extended to higher-dimensional optical lattices.

This work may lead to such practical instruments as advanced guidance systems for aircraft, small and transportable atomic clocks, magnetic-field sensors, and innovative laboratory studies of the interactions of atomic spins and motion. On-chip optical lattices could even evolve to become part of plug-in components of tomorrow’s quantum computers.

An optical lattice on a chip may also be installed on later versions of the Cold Atom Laboratory (CAL), which is being built for NASA’s Jet Propulsion Laboratory. CAL is scheduled for deployment to the International Space Station in 2017. Once in space, CAL will be used for ultracold-atom experiments in near-zero gravity. — Julie Phillips