The Indomitable Ruler of Light 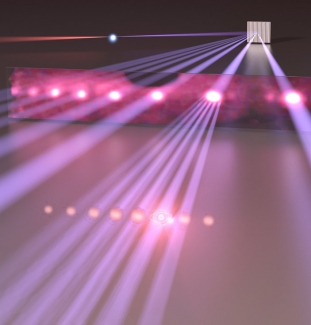 The Ye group has created the world’s first “ruler of light” in the extreme ultraviolet (XUV). The new ruler is also known more formally as the XUV frequency comb. The comb consists of hundreds of equally spaced “colors” that function in precision measurement like the tics on an ordinary ruler. The amazing thing about this ruler is that XUV colors have such short wavelengths they aren’t even visible to the human eye. The wavelengths of the XUV colors range from about 120 nm to about 50 nm — far shorter than the shortest visible light at 400 nm. “Seeing” the colors in the XUV ruler requires special instruments in the laboratory. With these instruments, the new ruler is opening up whole new vistas of research.

Recently, the Ye group used the XUV ruler to precisely measure very short-wavelength electronic transitions between different quantum states in argon and neon atoms. This experiment confirmed the presence of the XUV comb. It has also opened the door to exploring the internal quantum states of many different atoms and molecules. With the XUV ruler, scientists will be able to look at exactly how electrons arrange themselves in high-energy states inside molecules. The new ruler may also make it possible to develop new clocks based on the behavior of nuclei of atoms. The team responsible for these exciting prospects includes research associates Arman Cingöz and Tom Allison, graduate student Dylan Yost, Fellow Jun Ye, and their colleagues who provided the infrared laser used to make the XUV comb from IMRA, America.

Unfortunately, it’s impossible to build a pulsed XUV laser stable enough to be a frequency comb. To make an XUV comb, the scientists had to come up with a method to transfer visible or infrared comb lines up to XUV frequencies without losing the delicate and coherent comb structure. The Ye group has done just that.

In a nutshell, here’s how it works. First, the Ye group commissioned the high-power infrared ytterbium-fiber frequency comb developed by their collaborators at IMRA, America. Second, the researchers optically coupled the laser into an enhancement cavity that was carefully engineered to add laser pulses constructively. After 200 round trips through the enhancement cavity, the original laser pulse still had the same coherent structure, but it had reached a high enough intensity to initiate high-harmonic generation, or HHG. HHG is a process that results in the emission of high-frequency photons, or harmonics, of the original pulse.

Finally, the Ye group fed atoms of xenon or krypton into the cavity at the point where the light was most intense, setting the stage for high-harmonic generation to happen. The high-intensity electric field inside the cavity first stripped the outer electrons from the atoms, then shoved them back in the atoms, where they recombined. The recombined electrons emitted excess energy from this violent process as photons of light with XUV frequencies.

The researchers detected multiple high harmonics from HHG with both xenon and krypton. By looking at the spots of light associated with each harmonic, they were able to show that each burst of the high-frequency XUV light had a fine comb structure! They verified this finding by performing spectroscopy with the XUV combs inside the 13th and 17th harmonic light speckles. The researchers detected (for the first time ever) high-resolution signals from high-frequency electronic transitions in both argon and neon.

With this accomplishment, the Ye group now wants to make precision measurements of the quantum states of helium atoms as well as other exotic atoms and molecules. One of the group’s first goals is to experimentally test new theories of the internal structure of simple atoms. And, future research prospects are rich and varied. The new XUV ruler has opened up a whole new landscape that can be “combed” for hidden treasures. — Julie Phillips