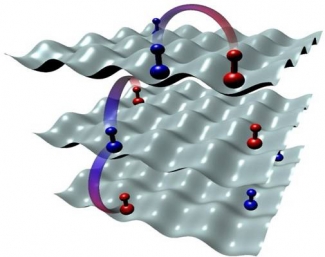 Research associate Bo Yan and his colleagues recently observed spin exchanges in ultracold potassium-rubidium (KRb) molecules inside an optical lattice (a crystal of light formed by interacting laser beams). In solid materials, such spin exchanges are the building blocks of advanced materials and exotic behavior.

The spin exchanges occurred when a rotationally excited KRb molecule interacted with a non-rotating KRb molecule in the ground state. Amazingly, the two molecules could be relatively far apart and confined in separate energy wells in the lattice, but still interact with one another. These interactions can result in the molecules swapping their quantum spin states! When this happens, the rotating molecule stops spinning and enters its ground state, while the second molecule starts spinning and becomes excited. Remarkably, all of the molecules stay in their original positions inside the lattice the entire time.

Yan’s pioneering experiment was the first ever to “see” spin-exchange interactions in the laboratory (at the relatively “high temperature of 200 nK). However, theorists had been predicting them for almost 10 years. Yan’s fellow researchers included graduate students Steven Moses and Jake Covey, research associates Bryce Gadway and Kaden Hazzard, and Fellows Ana Maria Rey, Debbie Jin, and Jun Ye. Their work recently appeared in the journal Nature.

To observe the great spin swap, the researchers had to overcome two key technical challenges. The first challenge was to “see” the spin swap in a noisy environment with lots of other things happening. The researchers solved this problem with a creative noise filter that allowed them to detect the spin swap.

The second challenge was due to the sophisticated microwave control needed for the experiment and the interactions of the laser light creating the optical lattice confining the molecules. Unfortunately there was no “magic” wavelength of the laser light that could control the energies of the different spins in the same way. Fortunately, however, there was a “magic” angle. By changing the angle of the laser, the researchers were able to reduce the light-molecule interactions enough to detect long-lived quantum superpositions[1] of the two possible molecular spin states in pairs of KRb molecules in the process of spin swapping.

The ability to observe spin swapping will have a huge impact on future research in such diverse areas as high-temperature superconductivity, energy transport through biomolecules and in chemical reactions, spintronics (a new kind of microelectronics), as well as the physics of liquids and solids. Because spin-exchange interactions are critical to understanding all these systems, their observation in the laboratory is a significant advance that will stimulate new physics research for years to come.

[1] Superposition is a state in which a particle holds two different properties, such as spin up and spin-down, at the same time.