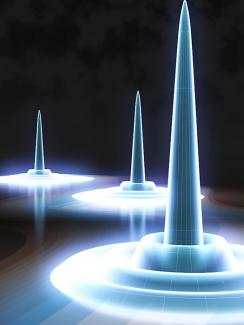 Theoretical structure of a quantum droplet showing possible locations of the positively charged "hole" with respect to a negatively charged electron located in the center (which is also the most likely location of the hole). A hole is like a bubble created when an electron in GaAs is excited by light.

When Andy Almand-Hunter and his colleagues in the Cundiff group shined a laser on a sample of gallium arsenide (GaAs), the last thing they were expecting to create was a fog of liquid-like quantum droplets, which the group named "dropletons." Dropletons are a new, stable form of matter much like an ordinary liquid—with one key difference.

Unlike normal everyday liquids, quantum droplets contain charged particles. The particles are negatively charged electrons and positively charged “holes.” Holes are like bubbles created when electrons in GaAs are excited by light.

When it discovered the quantum droplets, the Cundiff group was actually investigating the use of intense laser light to generate biexcitons, which are molecule-like structures in GaAs made of two excitons. Excitons are hydrogen-like quasi particles made of an electron and a hole.

“But the experiment didn’t behave at all in the way we expected,” Almand-Hunter said. “We expected to see the energy of the biexcitons increase as the laser generated more electrons and holes. But, what we saw when we did the experiment was that the energy actually decreased!”

The energy decrease meant that the researchers certainly were seeing something other than biexcitons. In fact, they weren’t sure what they had made. At this point, experimentalists Hunter, former research associate Hebin Li, and Fellow Steve Cundiff consulted their theorist colleagues at Philipps-University Marburg in Germany.

The German collaborators came up with the idea that the experimentalists had made quantum droplets. A quantum droplet is a structure containing multiple electrons and holes (for example, 4, 5, or 6 of each) that is in between that of a traditional atom with positively charged nucleus surrounded by negatively charged electron(s) and an older model of the atom that viewed it as a positively charged sphere with electrons embedded in it. The droplets behaved quantum mechanically because they contain only a few electrons and holes.

The experimental observations made by Almand-Hunter and his colleagues fit perfectly with the new theory. The researchers realized that they had inadvertently created a quantum fog of electrons and holes in close proximity to one another. In the process, they had discovered a new quasiparticle as stable as an atom or a solar system. This story is featured on the cover of the February 27 online issue of Nature.---Julie Phillips