The Clock that Changed the World 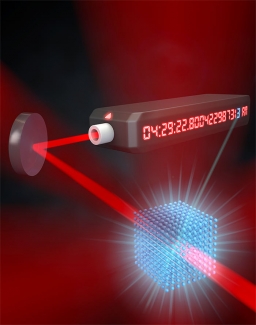 Imagine A Future . . . The International Moon Station team is busy on the Moon’s surface using sensitive detectors of gravity and magnetic and electric fields looking for underground water-rich materials, iron-containing ores, and other raw materials required for building a year-round Moon station. The station’s mission: launching colonists and supplies to Mars for colonization. Meanwhile, back on Earth, Americans are under simultaneous assault by three Category 5 hurricanes, one in the Gulf of Mexico and two others threatening the Caribbean islands. Hundreds of people are stranded in the rising waters, but thanks precision cell-phone location services and robust cell-tower connections in high wind, their rescuers are able to accurately pinpoint their locations and send help immediately.

Other new technologies in this revolutionary new era of quantum devices include precision instruments searching for dark matter and dark energy, ultraprecise electronics, unbreakably secure military communications, and ordinary laboratory-sized gravitational-wave detectors and x-ray lasers. There are also advanced scientific experiments making use of the most accurate absolute measurements in history––accurate to 10-23. These technologies were unheard of in 2017, when the world’s first quantum-gas optical-lattice clock demonstrated its capabilities by measuring a 3.5 X 10-19 fractional frequency shift in 2.2 hours of averaging time.

One new feature of the quantum gas clock was the placement of single 87Sr atoms in the energy wells of a three-dimensional optical lattice created by laser beams. This configuration allowed the researchers to control the quantum interactions of the atoms when they were in their lowest energy state. For instance, the 3D lattice prevented the atoms from colliding or interfering with each other. And, through their quantum interactions, the atoms collectively prevented any one atom from disturbing the others. These features ensured that all the atoms ticked at exactly the same rate, making it possible to make faster measurements.

This first quantum-gas optical clock is just the beginning of a revolution in precision measurement! By carefully honing every aspect of this first clock’s performance, the Ye group hopes to someday leverage the clock’s superior precision to achieve new levels of clock accuracy. Such a super-accurate clock would be useful not just for measuring time, but for precisely measuring an exceptionally broad range of physical quantities that cause changes in the clock’s frequency, i.e., ticking rate.

“I believe Jun’s quantum gas clock is a transformational discovery,” said Tom O’Brian, chief of JILA’s Quantum Physics Division. “This is the beginning of an era of understanding, controlling, and applying quantum interactions to the science of all kinds of precision measurement and to using quantum interactions to probe some of the key challenges of fundamental physics.

“Ye group scientists have not just made a better clock. They are also helping lead a new revolution in quantum mechanics and measurement science.” This accomplishment has been widely touted in the press.

1. Because 87Sr atoms are independent-minded fermions, when they occupy their lowest energy state, they cannot form a Bose-Einstein condensate. Rather the atoms fill in lowest energy states like rungs on a ladder, with two atoms, one spin up and one spin down, on each rung.