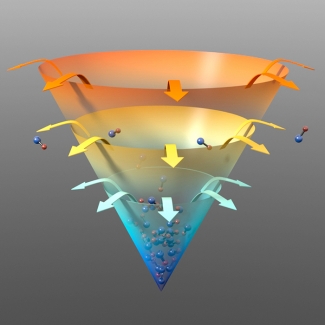 The Ye group has shown that evaporative cooling can cool a gas of hydroxyl radical (*OH) molecules down to at least 5 mK. In this process, some *OH molecules get hotter upon colliding and rise up and out of the trap; the remaining molecular gas gets colder, as shown in this artist’s conception.

The Ye and Bohn groups have made a major advance in the quest to prepare “real-world” molecules at ultracold temperatures. As recently reported in Nature, graduate students Ben Stuhl and Mark Yeo, research associate Matt Hummon, and Fellow Jun Ye succeeded in cooling hydroxyl radical molecules (*OH) down to temperatures of no more than five thousandths of a degree above absolute zero (5mK).

The final temperature of the experiment may well have been even lower because the group’s temperature measurement system stopped working at 5 mK. This landmark experiment is the first one ever to succeed in cooling a molecule found in nature to ultracold temperatures. It comes after nearly two decades of similar, but unsuccessful, attempts to do the same thing in other laboratories.

Earlier attempts to cool molecules to ultracold temperatures failed because the molecules studied had too few “elastic” collisions — the kind of collisions in which molecules bounce off one another. Thanks to some insightful theory work by senior research associate Goulven Quéméner and Fellow John Bohn, however, the Ye group opted to cool the *OH molecule, which the theorists predicted would have elastic collisions more than 90% of the time. This collision rate meant that the molecules have enough time to exchange energy, so that there are always some molecules with more energy than average, and some with less.

The experiment had several steps First, the researchers used a jolt of electricity through a mixture of water vapor and krypton to form the *OH molecules. Second, they used a linear decelerator equipped with an array of highly charged electrodes to slow the molecules down to a speed of 34 meters per second. The molecules were brought to a complete stop in the center of a permanent magnetic trap. These two steps, which have been under development for a decade, cooled the molecules down to ~50 mK.

Finally, the researchers initiated evaporative cooling, which required a neat trick to work. The usual approach of flipping a spin in the *OH molecules was not good enough in this case to let the hotter molecules escape from the trap. So the researchers applied an electric field, which opened up some little gateways in the trap that actually let the hot molecules out.

This creative process then selectively removed the most energetic (hotter) *OH molecules from the mixture after molecule-molecule collisions. By getting rid of the hottest molecules, the temperature of the remaining gas of molecules was lowered. The process could be speeded up by lowering the height of the trap holding the molecules to more rapidly concentrate colder molecules at the bottom.

The results were so exciting that the Ye group believes that in the future, it will be possible to evaporatively cool *OH  molecules to much colder temperatures in the micro- and nano-Kelvin ranges. It’s now conceivable that the group will one day be able to cool a *OH molecular gas down to the point where every molecule in the gas enters its lowest quantum state — in a process similar to the one used by Fellows Eric Cornell and Carl Wieman to make the world’s first Bose-Einstein condensate of rubidium atoms in 1995. — Julie Phillips