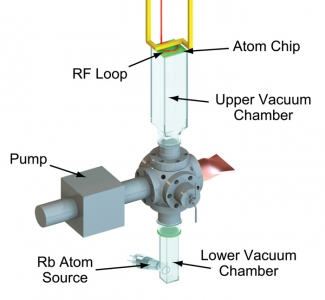 A color schematic of the Anderson group’s new two-chamber vacuum cell and its placement with respect to the atom chip and other system components.

The Dana Z. Anderson group has developed a microchip-based system that not only rapidly produces Bose-Einstein condensates (BECs), but also is compact and transportable. The complete working system easily fits on an average-sized rolling cart. This technology opens the door to using ultracold matter in gravity sensors, atomic clocks, inertial sensors, as well as in electric- and magnetic-field sensing. Research associate Dan Farkas demonstrated the new system at the American Physical Society’s March 2010 meeting, held in Portland, Oregon, March 15–19.

To perfect the new compact BEC transporter, Farkas worked closely with Fellow Dana Z. Anderson, graduate students Kai Hudek, Evan Salim, and Stephen Segal, and Matthew Squires, who received his Ph.D. from CU in 2008. The Anderson group has been working on different aspects of this new technology for more than a decade.

Key components of the new system include the two-chamber vacuum cell and an innovative atom-chip design. The new vacuum cell took the Anderson group more than a decade to perfect. Researchers built and tested more than 70 different prototypes before coming up with a design that provides the ultrahigh vacuum quality needed in the new portable system. The new vacuum cell is 10–20 times smaller than its conventional counterparts. It also serves as the platform for the atom chip where the BECs are made. Plus, the cell is now standardized, making it a good candidate for commercialization. 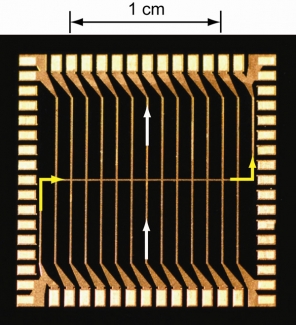 The vacuum side of an atom microchip.

The atom chip was developed in 5-year collaboration between Anderson and Victor Bright of CU’s Department of Mechanical Engineering, Teledyne Technologies, Inc., the Sarnoff Corporation, and Vescent Photonics. Although the collaboration’s microchip was not the first to incorporate a BEC, it makes a BEC faster than any comparable technology in the world. It can transform “hot” atoms at room temperature into a BEC in 3 seconds, about 10 times faster than traditional BEC apparatus. Such speed is important for such applications as atomic clocks or gyroscopes in which waiting a minute between measurements is problematic. For instance, the ability to rapidly read the state of the ultracold atoms will increase atomic clock stability, and faster transitions to BEC will allow more rapid measurements of acceleration and rotation. For these reasons, atomic clocks and gyroscopes employing BEC-on-a-chip systems are likely to be part of high-tech navigation systems on ships and airplanes in the future.

Additional advantages of the portable microchip-based system are its lower power usage and design flexibility. With an electrical power consumption of ~525 watts, the system can run on batteries, if necessary. Its system design can also easily be tailored to a variety of specific uses, primarily by incorporating atom chips with different wire configurations.  - Julie Phillips