From BEC to Breathing Forever 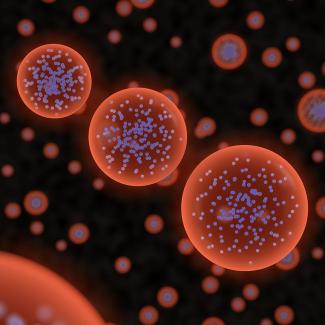 It took Eric Cornell three years to build JILA’s first Top Trap with his own two hands in the lab. The innovative trap relied primarily on magnetic fields and gravity to trap ultracold atoms. In 1995, Cornell and his colleagues used the Top Trap to make the world’s first Bose-Einstein condensate (BEC), an achievement that earned Cornell and Carl Wieman the Nobel Prize in 2001.

The Nobel-Prize-winning creation of BEC had been a race to the finish line, as labs all over the world had also been attempting to be the first to validate the 70-year-old prediction of BEC by Satyendra Nath Bose and Albert Einstein. The innovative Top Trap was the key to Wieman and Cornell’s great achievement. Afterwards, Cornell, Wieman, and their colleagues conducted a host of Top-Trap experiments, publishing 20 significant papers on the physics of ultracold atoms over the next two decades.

By the end of that 20-year period of discovery, however, the now much older (and more complicated) Top Trap was wearing out. It was time to think about one last experiment. Only one of Cornell’s graduate students, Dan Lobser, knew how to operate the complicated apparatus. So Cornell and Lobser enlisted additional help from student assistant Andrew Barentine and Fellow Heather Lewandowski, who had previously worked with Lobser.

Cornell and Lewandowski decided upon a fitting final experiment for the Top Trap: a test of a special case of Boltzmann’s transport equation that had never been proved. This part of Boltzmann’s theory predicted that, once set in motion, a cloud of atoms in a perfectly spherical trap would breathe, or oscillate, forever. It was a perfect experiment for the Top Trap despite being somewhat of an historical oddity.

Although physicists today revere Boltzmann as a giant in the field of physics, he was vehemently attacked when he published the transport equation in 1876. For starters, Boltzmann assumed that matter was made of atoms, an idea that was vigorously disputed at the time by many scientists who claimed energy was at the root of the physical world. With respect to the special case showing that it was possible for a physical process to continue forever without damping, or stopping completely, “everyone” knew that was crazy. If something starts moving, it slows down or cools down. Eggs break, for heaven’s sake, and they don’t reform into eggs. That’s just the way the world works!

Boltzmann’s controversial idea was that damping happens when you put lots of atoms together, with just one or two exceptions. This idea was heresy to the scientific establishment of his time. It was also right.

Even though physicists today believed the special case is correct because the rest of the transport equation has been validated, Cornell and Lewandowski decided to prove it. The Top Trap was the perfect instrument to use.

The researchers placed an ultracold cloud of rubidium atoms in the Top Trap and started the cloud oscillating. The cloud oscillated in and out in what’s known as a “monopole breathe.” While it was “breathing,” the cloud changed in volume by about 30%. Most importantly, the breathing continued for a very long time—long enough to vindicate Boltzmann.

When the researchers finished taking the data for the experiment, they disassembled the Top Trap. While this was happening, Eric Cornell walked out of the lab where he’d started an amazing scientific journey at JILA 25 years earlier. It was hard to watch an “old friend” disappear, though perhaps not quite as hard as it had been for Boltzmann to be dismissed and reviled for his stunning insights into the nature of the physical world.—Julie Phillips