The Beautiful Ballet of Quantum Baseball 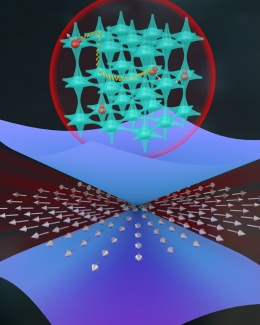 The Rey and Ye groups discovered the strange rules of quantum baseball earlier this year. But now, quantum baseball games happen faster, and players (dipolar particles) are no longer free to move or stand wherever they want. Players must not only be stronger to jump and catch the balls (photons), but also more organized. At the same time, they must be good spinners. And, only a small amount of disorder is tolerated! The fast spinning of the players and their fixed positions have made quantum baseball a whole new game!

However, the players must also know how to spin on their toes, just like ballet dancers! The reason the players have to spin en pointe is that balls now also spin. Because the balls spin, the players must start spinning as they catch them. With these new rules, the balls and players can execute an intricate dance in which they all rotate in the same direction, which causes exotic massless quantum particles (called Weyl particles) to show up in the quantum baseball field. These red particles appear inside the playing field in the picture.

The players still exchange balls because dipoles interact through exchanging photons. But, now the balls spin as they fly across the playing field. When a player throws the ball, the player who catches it can’t run after the ball because she is frozen in place. All she can do is to jump and spin––if the ball is spinning. She can spin even if she spins in the opposite direction of the ball.

“It’s the same balls we used for the first quantum baseball game, but now the players need to be ordered,” explained Fellow Ana Maria Rey. “Before the players were everywhere, but now they have to be organized. A lattice (crystal of light) forces the players to be in specific positions. They don’t run, only jump and spin.”

The beautiful ballet of quantum baseball is the result of a quantum connection between spin and motion (known as spin-orbit coupling) that occurs as players jump and spin. Exactly what happens in the game depends on the location of the players and the velocity of the balls.

What’s interesting is that for specific ball velocities, where the players stand as well as their spinning and jumping can make them more coordinated. When the players get more coordinated, the ball can be in the air for a much longer time before being dropped. The collective behavior that gives the team better catching capabilities is called subradiance.1

Subradiance allows the players to coordinate their spinning in such a way that they all circulate in the same direction, and Weyl particles emerge in the field. Weyl particles have been seen in solid-state systems and predicted to emerge in complicated cold-atom settings, but seeing them in a simple, natural game like quantum baseball was a surprise.  Naturally, the Rey group has already spoken with the Ye group about doing an experiment to confirm this provocative finding.