All Quiet on the Amplifier Front 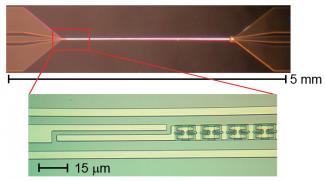 Fellow Konrad Lehnert needed a virtually noiseless amplifier to help with his experiments on nanoscale structures, so he invented one. Working with graduate student Manuel Castellanos-Beltran and NIST scientists Kent Irwin, Gene Hilton, and Leila Vale, he conceived a tunable device that operates in frequencies ranging from 4 to 8 GHz. This device has the lowest system noise ever measured for an amplifier. In fact, it produces 80 times less noise than the best commercial amplifier. More importantly, it adds no noise to a measurement system — a critical feature for a system probing the quantum limits of measurement.

In addition to its tunability and low noise, the new amplifier exhibits the largest "squeezing" of quantum fluctuations (10 dB) ever measured for this kind of amplifier. Lehnert says squeezing is a "devilishly nonintuitive" process in which the quantum uncertainties associated with measuring phase and amplitude are circumvented to allow virtually noiseless measurement of just the amplitude changes in a tiny microwave signal.

The amplifier will be a key addition to experiments that map information onto microwave fields, including those that probe the electronic states of qubits (quantum computing) or the position of nanomechanical oscillators. For instance, the Lehnert group will use their amplifier in future experiments to detect minute forces such as those produced in a nanomechanical beam by quantum fluctuations (see JILA Light & Matter, Summer 2008).

The Lehnert group’s new amplifier is not the first device of this kind. However, it is the best design ever for a parametric device employing Josephson junctions, which are superfast switches made of thin layers of insulating material sandwiched between layers of superconducting material. The Lehnert amplifier consists of a series array of 960 Josephson junctions split into parallel pairs that form SQUIDS (superconducting quantum interference devices). The SQUIDs are exquisitely sensitive to tiny changes in electric current.

The SQUID array forms a composite metamaterial that gains its properties from its structure, rather than directly from its chemical composition. The entire structure is embedded in a microwave cavity, where its properties can be controlled by small changes in the magnetic field of the cavity. This key feature allows the amplifier to be tuned between 4 and 8 GHz even though it has a narrow amplification range on the order of a few megahertz.

The Lehnert group will use this nifty device to amplify signals generated by nanoscale motion and transmit them to a larger, more traditional microwave amplifier, which will output signals that can be read with ordinary electronics.   - Julie Phillips