All Dressed Up and Ready to Probe 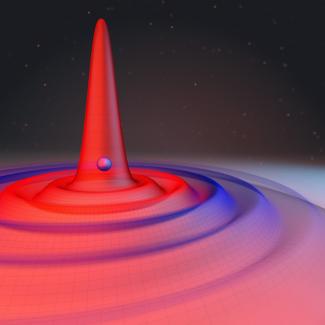 A single impurity (shown as a round ball) entering a Bose-Einstein condensate (BEC) creates excitations that give researchers information about both the impurity used as the probe and the condensate.

Newly minted Ph.D. Ming-Guang Hu and his colleagues in the Jin and Cornell groups recently investigated immersing an impurity in a quantum bath consisting of a Bose-Einstein condensate, or BEC. The researchers expected the strong impurity-boson interactions to “dress” the impurity, i.e., cause it to get bigger and heavier. In the experiment, dressing the impurity resulted in it becoming a quasi particle called a Bose polaron.

“What we really did was study the behavior of the quantum bath when a potassium atom disturbed it,” said Fellow Deborah Jin. Jin said the impurity created excitations in the BEC that helped the researchers understand how the quantum bath responded to the potassium-atom impurity.

She also explained that because the impurity was moving through a BEC, the researchers called it a Bose polaron. Similarly, an impurity moving through a quantum bath of fermions, or Fermi Sea, would be called a Fermi polaron.

Jin said there is an interesting similarity between ultracold polarons and electrons moving through a crystal made of positively charged ions. For instance, scientists think of an electron moving through an ion crystal as a quasi particle. They observe that the farther an electron travels through an ion crystal, the more massive the quasi particle appears to be. As the interactions get stronger, the distortions of the lattice get larger, and the quasi particle moves more slowly.

“The atom gases give you a new way to explore that same phenomenon, but with a BEC and an impurity particle moving through it,” Jin said. “It turns out that it doesn’t matter what the quantum behavior of the impurity is because, in theory, you only have one particle, and it can be a fermion or a boson.”

Studies like this one where there is a single impurity moving through and interacting with a BEC are helping the Jin and Cornell groups plan for future investigations of a strongly interacting BEC in which all the bosons interact with each other.

“Experiments like this one allow you to see some of the same behavior you might see from an electron moving through a crystal,” Jin explained. “But our system isn’t a crystal. It’s continuous and has the ability to become strongly interacting under the right conditions.” Jin says this experiment has opened the door to a whole new area of exploration in ultracold physics.––Julie Phillips

This work appeared online as an Editor’s Suggestion in Physical Review Letters on July 28, 2016, alongside a closely related article by another group. The JILA researchers responsible for this trailblazing work include Hu, graduate students Michael J. Van de Graaff, Dhruv Kedar, and John P. Corson as well as Fellows Eric Cornell and Deborah Jin.