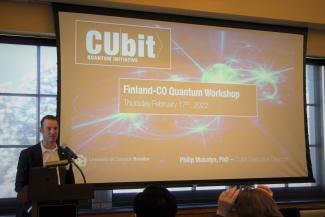 This week has been a big week for Colorado's quantum community, as delegates from the Government of Finland visited the snowy state to celebrate the beginning of several quantum research and quantum technology partnerships between the Fins and both academia and industry-based groups in Colorado.

Proceedings began on Tuesday with Colorado Governor Jared Polis and the Government of Finland signing a Memorandum of Understanding (MOU) to create collaborative partnership opportunities focused on foreign direct investment, research and development projects, as well as company expansion opportunities and exchanges. The MOU centers on the research and commercial sectors of advanced technologies, including quantum and aerospace technology.

According to Governor Polis: “Colorado's economy is roaring back, creating jobs and creating new partnerships at home and abroad, so we are pleased to partner with the Government of Finland, a country that shares our values of innovation, collaboration and creating a better future for generations to come.”

The Finnish delegation spent three days in Colorado, touring several technology centers and local businesses, gaining a better understanding of the aerospace and quantum technology landscape of the Front Range. “I don't think there are many places on Earth where just five million people have so much going on with the aerospace industry, high-performance computing, and green solutions,” Finland's Ambassador to the U.S., Mikko Hautala stated. “Add to that our common challenges of building resilient communities, tackling climate change, and generating green jobs, I think it is long overdue Colorado and Finland bring their partnership to the next level.”

The three-day tour ended on campus at the University of Colorado Boulder, as the university’s Cubit Quantum Initiative hosted the Finland-Colorado Quantum Workshop. The workshop focused mostly on the quantum industry from both Finland and Colorado. “We're really excited to be thinking about our region, as well as the country, and then internationally how we partner to help build this quantum ecosystem overall,” said Terri Fiez, CU Boulder vice chancellor for research and innovation. “I'm super excited about this discussion today, highlighting some of the companies that are currently being very successful, and then also looking at how we partner to help build this international effort in quantum.”

The CU Boulder-hosted workshop included representatives from some of the biggest names in the quantum industry, including NIST, JILA, Quantinuum, ColdQuanta, Atom Computing, IQM, Bluefors, and Vescent Photonics. As many of these companies have a heavy presence in Colorado, they are eager to learn more about the new partnership opportunities with Finland.

The delegates from Finland were just as eager to develop new opportunities with their American colleagues. “In Finland, we are trying to make technology, especially emerging technologies, one of the key cornerstones of our relationship with the U.S.,” explained Ambassador Hautala. “We are really committed to developing our cooperation further.” In his speech at the workshop, Ambassador Hautala continued to express his excitement with a joke: “This Finnish delegation and I believe that all of our quantum companies will be like Terminators, coming back. We have studied your potential and we are here for a particular purpose.” Finland, like Colorado, also has a growing quantum ecosystem that is looking to expand its partnerships.

The workshop continued with two keynote speakers: Didi Liebried from NIST and Jussi-Pekka Penttinen from Finland's Vexlum. Both spoke on the productive partnership their groups had with each other when it came to developing different colored lasers, illustrating the already successful partnerships happening between the two groups.

Following the keynote address was a quantum industry panel, with representatives from Quantinuum, ColdQuanta, Atom Computing, and IQM as panelists. Questions ranged from partnership opportunities to international relations. In reflecting the sentiment of the panel, Barry Behnken, VP of Engineering at ColdQuanta said: “It's not sufficient, especially in the startup phase, for companies to try to do everything on their own shoulders. It's important to be able to have resources, particularly academic or government institutions, that we can use to leverage each other's strengths and resources to move forward. We feel very strongly about the importance of the quantum ecosystem.”

The rest of the workshop reflected this sentiment, as another panel with Bluefors and Vescent Photonics was held, followed by a discussion of government labs (both Finnish and American) as well as a closing speech on quantum education and the incoming workforce. No doubt that both the Government of Finland and the Colorado quantum groups left this workshop full of ideas and promises of further partnerships that will benefit both regions.

CUbit announced the first four of its expanding network of strategic industry partners, many of which feature a strong Front Range presence, earlier this week.