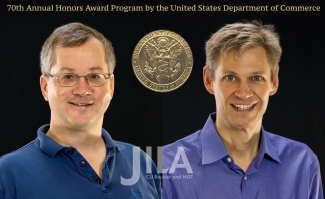 JILA Fellows Dr. Tom Perkins and Dr. Konrad Lehnert received gold and silver medals, respectively, from the United States Department of Commerce for their outstanding research contributions to the fields of biomechanics and quantum information science and technology.

Dr. Perkins received the Gold Medal, which is the highest honorary award given by the United States Department of Commerce, or DOC. Perkins was recognized for creating the world’s best atomic force microscope tailored to biological measurements. This device can “grab” onto biological molecules, such as proteins, and measure the tiny forces involved in their folding and unfolding.

Perkins was also recognized for using this technology to study the structure and dynamics of key membrane proteins, which are proteins that control the exchange of chemicals into and out of cells. His techniques revealed the structure and dynamics of these proteins in ten times greater detail than previously possible. This research will lead to better understanding, and subsequently diagnosis and treatment, of the diseases developed through protein misfoldings, such as Alzheimer’s, Parkinson’s, and cystic fibrosis.

“I am honored to receive this award,” said Perkins. “It reflects a decade of efforts by my students and post-docs as we sequentially addressed a set of metrological limitations to bioAFM, including a key advance by an undergraduate. We then successfully demonstrated our metrological improvements by resolving a multitude of hidden dynamics of bacteriorhodopsin, a result that biologist and biochemists cared about.”

Dr. Lehnert received the Silver Medal as part of a team of NIST scientists building the components of a quantum communications network. In addition to Lehnert, the team included Dr. Jose Aumentado, Dr. Raymond Simmonds and Dr. John Teufel. Aumentado, Simmonds and Teuful are scientists in the Applied Physics Division of the National Institute of Standards and Technology in Boulder, CO.

The team was recognized for the first realization of the complex components needed for future quantum networks. Quantum networks, or the ability to connect multiple quantum nodes, will advance quantum computing and the rapid, secure exchange of quantum information. The components realized by the team include techniques to store, exchange, transmit, amplify, and readout quantum information using quantum-based superconducting circuits and quantum-controlled micromechanical resonators. The team’s accomplishments represent multiple first and best advances in technologies for quantum networks.

“It was exhilarating to get out in front of this highly competitive new research area,” said Lehnert. “By working together, John, Ray, Jose and I were able to quickly make great progress.”

The awarding of DOC gold and silver medals is an annual traditional established in 1949. The awards are presented to individuals, groups, or organizations in the Department of Commerce for extraordinary, noble, or prestigious contributions.

Previous recipients of DOC awards include 14 JILA Fellows. The most recent JILA Fellow awardee was Ralph Jimenez, who was part of a NIST team awarded the Gold Medal in 2017 for developing tools to create stop-action X-ray measurements of molecules. One of the earliest JILA Fellow awardees was Jan Hall, who received the Gold Medal individually in 1969, and again as part of a team in 1974 and 2002.