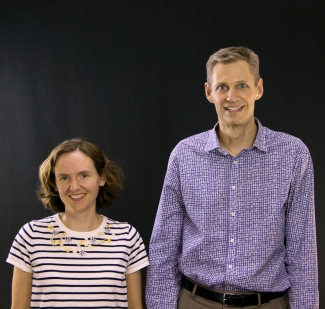 Fellows Cindy Regal and Konrad Lehnert have won the 2016 Governor’s Award for High-Impact Research in Foundational Science and Technology, CO-LABS announced today. JILA Chair Dana Anderson submitted the nomination of their joint research on building, studying, and using devices that exploit the strange and powerful properties of quantum mechanics. The nomination was entitled, The JILA Quantum Machine Team: Extending Mastery of Quantum Mechanics from Microscopic Particles to Human-Made Machines.

“This award is well deserved,” said JILA’s Quantum Physics Division Chief Tom O’Brian. “Konrad Lehnert and Cindy Regal are leading a 21st century revolution by creating the first fully quantum machines. These machines will be the foundation of powerful new 21st century technologies, including ultra-secure quantum communications networks, quantum computers, advanced sensing for defense and intelligence applications, as well as novel approaches to making precision measurements in support of both research and manufacturing.”

The Lehnert/Regal Quantum Machine Team has already racked up some major accomplishments on the path to these eagerly anticipated 21st century technologies. Their accomplishments include (1) the cooling of a drum made of about 1018 aluminum atoms to its quantum ground state, (2) the creation of the world’s first efficient two-way converter between electrical and optical signals––an important step along the way to making a fully quantum machine, and (3) the world’s first laser cooling of this converter––a human made object––to about 14 millionths of a degree above absolute zero.

Lehnert’s and Regal’s work represents foundational research and technology development at its best, and CO-LABS clearly agrees. Each year a special committee appointed by the CO-LABS Board of Directors reviews nominations from Colorado labs for the Governor’s Award for High-Impact Research and selects projects that have had a significant global, national, or state impact resulting from a scientific breakthrough, change in public policy, or development of a new technology. The Governor’s Award for High-Impact Research has honored Colorado scientists and engineers from federally funded research laboratories in Colorado since 2009.

This year’s award winners will be recognized a special event to be held Thursday October 6, 2016, at the Denver Museum of Nature & Science. The event will be presented by The Alliance for Sustainable Energy and hosted by CO-LABS.

CO-LABS is a non-profit consortium of federal laboratories, research institutions, businesses and economic development organizations that provide financial and in-kind support for programs that promote the retention and expansion of Colorado scientific resources.