JILA's legacy on the moon

The Laser Ranging Retroreflector, seen here on the moon in 1969, is the last operating experiment from the Apollo 11 mission.

This summer America remembers a milestone scientific achievement. On July 20, 1969, Apollo 11 landed on the moon. NASA deployed several experiments as part of that mission. While they were only supposed to last 10 years, one experiment is still going 50 years later: the Laser Ranging Retroreflector, which helps scientists measure the distance between Earth and the moon. That experiment was developed at JILA by Dr. James Faller and Dr. Peter Bender. Below is a reprint of the Boulder Daily Camera's story, written by Charlie Brennan, looking back at lunar ranging 50 years later. 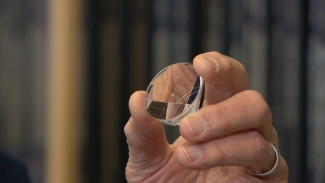 Dr. James Faller holds up one of the corner cubes used on the LRR experiment from Apollo 11.

When Boulder’s Jim Faller contemplates the moon hanging in the night sky, he is looking toward one of his finest career achievements — although it takes a powerful telescope to detect evidence of his handiwork.

Faller, still earnest and engaged with his science at 85, is among those for whom the approaching 50th anniversary of the July 20, 1969, lunar landing by Apollo 11 is far more than an exercise in nostalgia about the wondrous deeds of others.

It was Faller, then a graduate student at Princeton University working on his doctoral thesis under Professor Robert Dicke, who broached the idea of putting a retroreflector on the moon capable of reflecting back a laser pulse from Earth, thereby helping to better define the distance — and variances in that distance — between the two celestial bodies to a precision of plus or minus 10 inches.

The work that sprang from that brainstorm has produced the only continuous experiment still ongoing from the pioneering lunar landing five decades ago — an array of 100 corner cube prism reflectors, 20-by-20-inches and deployed by astronaut Buzz Aldrin, which direct any light that strikes them back to their source in 2½ seconds.

In a recent interview in his cluttered office at the University of Colorado’s JILA (formerly the Joint Institute for Laboratory Astrophysics) where he is a fellow adjoint (“The notion that the scientific isn’t somewhat chaotic is a wrong notion,” he muttered, glancing at the scattered jumble of papers, models and mementos competing for space around him), Faller paused for a couple of beats when asked if he is proud of his place in planetary exploration.

“I suppose,” he finally said.

‘He was a pioneer’

A brief history of Faller’s research by Boulder’s National Institute of Standards and Technology includes the first page of a 1962 draft paper Faller proffered to Dicke, “A Proposed Lunar Package (A Corner Reflector on the Moon).” It opens, “This note describes what is felt to be both a useful and at this time a practical lunar package.”

“Professor Dicke, would you see if this makes any sense. Jim Faller” is scrawled at the top right of the page. “Perhaps we could discuss this. Bob D,” is scratched on the paper’s opposite corner. 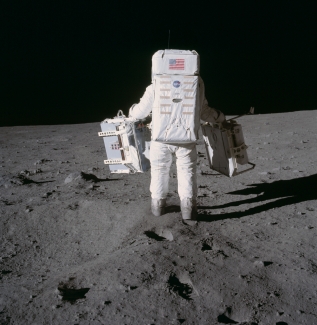 The late University of Maryland Physics Professor Carroll Alley was principal investigator of what came to be known as NASA’s Lunar Ranging Experiment team. But Dicke, in reminiscences believed to be composed in the last year of his life, wrote that “Jim Faller first suggested this, and I remember that he brought a corner reflector mounted in a rubber ball to (an informal weekly meeting of Princeton physicists) to show how the experiment might be done.”

The rationale for having Alley take the lead in proposing the idea to NASA, Dicke wrote, was that Alley, by virtue of being at the University of Maryland and close to NASA headquarters, would be better positioned logistically to coordinate the group’s efforts with NASA.

A second Boulder scientist, Peter Bender, who like Dicke is a JILA emeritus fellow who at 88 works five floors above Faller, also was part of the lunar laser ranging team.

“I was involved, but really much less than Jim,” Bender said. “He arrived as a post-doc at JILA in December of 1962, and he had with him a draft of a paper suggesting putting reflectors on the moon.”

“Peter is the father confessor,” Faller said, who also credits mentorship from Nobel Prize winning JILA colleague John “Jan” Hall. “If I ever had a question about science or physics or other details, I could go up to Peter’s office and sit on his sofa and say, ‘Peter, I don’t understand something.’ And he would say ‘That’s a hard question. Let’s talk about it.’”

That initiative utilizes a 3.5-meter telescope in southern New Mexico to bounce laser pulses off the reflector arrays, measuring their round trip to a precision within a few picoseconds, corresponding to about a millimeter of precision in range to the moon. Using that data, scientists will be able to gauge the relative acceleration of the Earth and moon toward the sun in order to ascertain the free-fall properties of Earth’s gravitational self-energy.

Murphy, who said he was “in utero” at the time of the first manned moon landing, referred to Faller and Bender as the experiment’s “grandfathers.” And of Faller, he said, “He was a pioneer in this technique and had boots on the ground, building the apparatus to carry out the first measurements.”

It almost did not happen.

Dicke originally imagined the lunar laser ranging array would be deployed by NASA’s Surveyor missions, which achieved robotic soft landings on the moon, in preparation for Apollo landings.

But after the Surveyor program was concluded in January 1968 with Faller’s concept still Earth-bound, attention turned to trying to see it included in the NASA’s Apollo Lunar Surface Experiments Package.

“We were told by NASA that they had already selected all the lunar surface experiments through Apollo 21 — and of course it never got that far,” said Bender, of Apollo, which saw its final launch in December 1972 with Apollo 17.

But at a meeting at NASA in September 1968, Bender said, the lunar reflector team learned the elbow and knee joints of the space suits were showing that astronauts would have a hard time working as long as four hours on the lunar surface, and that therefore, experiments making the trip would need to be focused on those that required less time and labor.

“And nine months later, due to the preparations by Jim and others that had been made, we were able to have a package on Apollo 11.”

It also was not readily apparent the experiment was going to work.

Faller, on the day Neil Armstrong and Buzz Aldrin set down at Tranquility Base, was at Lick Observatory on Mount Hamilton near San Jose, Calif., with astronomer Joe Wampler. Firing one laser system toward the moon 20 times per minute, and the second just twice a minute but with a higher pulse energy and lower beam divergence, they got nothing in return.

“Our first ranging (seeking to obtain bounce-back from their lasers) did not work, because we didn’t know where to aim,” Faller said. “When you send light up there, it went out of a 120-inch aperture, but by the time it gets to the moon, it has spread, through defraction, so that it’s two, three, four miles across.

“But the moon is a big place, and they did not tell us where they were, within two, three, four or five miles. They were, I think about 20 miles off” from where they had expected to land.

Because of imprecision in knowing the array’s location on the moon, and the moon’s low position in the sky, Faller and Wampler decided to take a break in sending pulses to the moon until Aug. 1, at which point the Apollo astronauts were back on Earth, with the array left in place.

“The moon doesn’t have a bullseye on it. It is sort of fuzzy, and it depends, night to night, on the shading, as the moon moves and the sun changes. It looks different every night,” said Faller, who compared the pulses beamed toward the array as akin to an Easter egg hunt, where “you look here, you look there."

Dicke, his thesis advisor, was with him at the Lick Observatory, as the experiment finally proved a rousing success.

“We had very strong returns, basically. And so he came downstairs and said, ‘OK, you have to call NASA headquarters, because anytime day or night, they said to call.’ And so I called, and they were just thrilled. Because this was a big deal for them, this success.”

Faller and Bender can still be found at CU Boulder’s JILA tower most days, very much still pursuing their scientific inquiries, and also well aware of not only the approaching Apollo anniversary, but the ambitions a new president’s administration has to return men to the moon by 2024.

They are not tremendously supportive of the Trump administration’s space initiative, which has couched a manned return to the moon as a stepping stone to a manned landing on Mars.

“I think it’s premature, at this point,” Bender said of another manned moon landing. “There is so much that can be done more efficiently, using remote sensing. Eventually, going back to the moon may be in the cards, but I think it’s going to be mainly for reasons other than the science objectives. But, I don’t know.”

Faller’s thoughts fall along the same the lines.

“Only if there is some absolutely fantastic piece of science that can’t be done any other way, such as using robots, which also would result in a very much lower cost,” Faller said. “I haven’t thought of any such experiment, but that doesn’t mean one doesn’t exist.”

He put his objections more strongly, as it pertains to putting boots on the red planet.

“I think the idea of going to Mars for example, with human beings, is just crazy. Absolutely,” Faller said. “It’ll make the cost 10 times higher, to make it safe for human beings to have a chance that they can come back. And, second, you have a very good chance they won’t come back. Which sort of is a blot on the program. And you gain no science. You get nothing new.

“I think if I have a television scan of the horizon I’m seeing exactly what the human being sees, when he or she looks at it. And there is no additional information to be had.”

With a head of steam on the subject, Faller added, “We’re talking a trillion dollars” for a manned Mars landing. “That’s a rough guess, but I think it’s right. What could you do with a trillion dollars? Frankly, I would divide it up in little sacks and give it to the poor of the world and make this country’s contribution to giving them healthy food, healthy water and a few other things. And maybe we’d have a bit more of a peaceful society.”

Nearby Faller as he spoke was a photo he reached for, to share with a visitor. It shows a roughly 26-year-old version of himself, hair jet black instead of its current snowy white, reaching inside a vacuum tube with a magnet during a gravitational experiment.

“I looked like a kid,” he mused, scrutinizing himself 60 years in the past. “Basically, is that someone you want to send to NASA headquarters, where they all wear brown suits and ties?” Assuming an imagined voice of dismissive authority, he added, with a shake of the head, “This kid isn’t going to make an impression.”

The footprints in moon dust around Jim Faller’s retroflector, still there 50 years later, argue to the contrary.