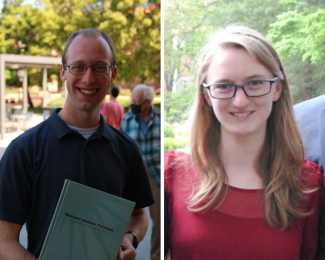 Two JILA graduate students were awarded this year's Richard Nelson Thomas Award for Graduate Students in Astrophyiscs. This award is given annually in honor of Dr. Richard Nelson Thomas, a founding member of JILA and an astrophysics researcher. Dr. Thomas was instrumental in establishing JILA's Visiting Fellows program, as well as growing the institution as a whole. Because of Dr. Thomas' legacy, his family and friends established an annual award given to an outstanding graduate student in astrophysics.

This year, graduate students Tyler McMaken and Lia Hankla received the award. McMaken studies under JILA Fellow Andrew Hamilton, and focuses on black hole dynamics, looking at how quantum field theory and general relativity work in tandem on this phenomena in the galaxy. Similarly, Hankla also studies black holes under JILA Fellow Jason Dexter. Her research focuses on plasma (hot gas) interacting with the black holes. Both graduate students will receive $1000 as part of the award. These students were nominated by several JILA faculty members in order to recognize their hard work and dedication to their field.