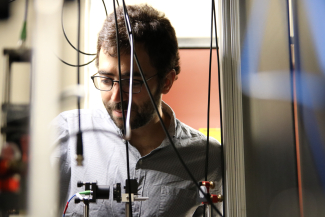 JILA and NIST Fellow Adam Kaufman in his lab

Boulder, Colo. — Physicist Adam Kaufman of both JILA and the U.S. Department of Commerce’s National Institute of Standards and Technology (NIST) has been awarded the 2023 New Horizons in Physics Prize from the Breakthrough Prize Foundation  for his work in advancing the control of atoms and molecules to improve atomic clocks and quantum information processing.

“Adam’s work has opened new possibilities for quantum physics, for atomic clocks and more, and we are proud to see his accomplishments recognized,” said Under Secretary of Commerce for Standards and Technology and NIST Director Laurie E. Locascio. “This award recognizes not only his scientific achievements, but how those achievements have already advanced the research of others in this field. I am confident there are many more scientific breakthroughs in his future.”

Physicists are continually looking for better ways to isolate and control the molecules, ions and atoms that make up the quantum world. Optical tweezers are very tightly focused beams of light that can quickly trap and manipulate atoms and molecules. Arthur Ashkin, who developed optical tweezers while at Bell Laboratories, received a Nobel Prize in Physics in 2018 for the invention.

Kaufman leads a research group at JILA, a joint research institute of NIST and the University of Colorado Boulder. His team explores using optical tweezers as a means of creating well-controlled quantum systems — in this case, composed of ordered arrays of single alkaline-earth atoms. The versatility of the systems the researchers explore has enabled new types of atomic clocks, quantum information processing and, potentially, the realization of novel states of matter.

One of the projects Kaufman is recognized for is how these tweezers can be used to improve optical atomic clocks. Optical atomic clocks use the movement of electrons in an atom to measure time. But these clocks require atoms to be arranged and prepared precisely so the atoms do not interfere with one another and throw off the clock’s measurement. That process typically takes a lot of time and preparation, and the amount of time the atoms can be coherent or “run” as a clock can be limited to a few seconds before the atoms need to be reset.

Kaufman and his team use the optical tweezers to trap atoms quickly and efficiently, specifically strontium atoms, to make an optical atomic clock. The tweezers also allow them to control interactions between atoms, preparing entangled atomic states (a quantum phenomenon in which individual atoms can act as one) for the clock. With this strategy, Kaufman’s group achieved long coherence times, running the clock continuously for 30 to 50 seconds. They also prepared the first entangled “Bell states” in a neutral-atom optical clock, in which the entanglement can accelerate the tick rate of the clock and accordingly improve its precision.

In addition to using optical tweezers for atomic clocks, Kaufman has also advanced the use of tweezers to manipulate alkaline-earth atoms for processing quantum information, which is required for quantum computing and better understanding the atomic world and how we can harness it for new applications.

“When fully controlled, these atoms that we work with are extremely versatile, impacting a broad range of goals in quantum information science,” Kaufman said. “Further, the set of achievements recognized in this prize, of mine and my colleagues, really speaks to the power of the optical tweezer paradigm — I think there is a lot more to come.”