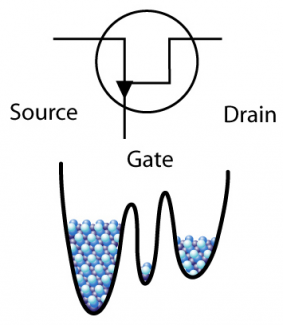 JILA Fellow Dana Z. Anderson, JILA visiting scientist Alex Zozulya, and a colleague from the Worcester Polytechnic Institute postulate that the ultracold coherent atoms in a Bose-Einstein Condensate (BEC) could be configured to act like electrons in a transistor. An “atom transistor” would exhibit absolute and differential gain, as well as allow for the movement of single atoms to be resolved in a precision scientific measurement.

The proposed device consists of trapping a BEC in three spatially separated potential energy wells. The wells, or traps, are the (1) source well, (2) gate well, and (3) drain well, as shown in the figure. When the traps are brought close together and interact, the atoms in the source well can quantum mechanically tunnel to the drain well only when the chemical potential of the gate well is roughly equal to that of the other two wells. Placing atoms in the gate well tunes its chemical potential.

The atom transistor can be used to amplify weak atomic signals. The chemical potential of the gate is dependent upon atomic interactions. Therefore it can be very sensitively tuned by the addition of single atoms to the gate. Since the rate of tunneling between source and drain is dependent upon the chemical potential in the gate, a small change in the population of atoms in the gate will cause a larger proportionate change in the drain population.

Anderson says the inherently quantum mechanical nature of BECs makes devices incorporating them fundamentally interesting. For instance, the use of atom transistors could increase the sensitivity of atom sensors and atom gyroscopes, which use atoms to make physical measurements.   -  Ryan Smith.