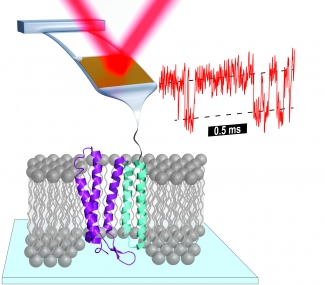 The Perkins group continues to extend the performance of its unique Atomic Force Microscope (AFM) technology, revealing for the first time a dozen new short-lived intermediate states in the folding and unfolding of a membrane protein that controls the exchange of chemicals and ions into and out of living cells. Measuring the energetics and dynamics of membrane proteins is crucial to understanding normal physiology and disease, and the Perkins group’s observation of multiple new folding/unfolding states shines new light on these cellular “gatekeepers.”

Because membrane proteins are so important, the Perkins group wanted to understand membrane behavior inside their natural environment, i.e., a lipid bilayer. For nearly 20 years, researchers have been studying the behavior of these proteins with AFM.  Bacteriorhodopsin, like many membrane proteins, contains seven helical structures that span the width of the lipid bilayer that separates the outside of the cell from the inside. And, in the last 15 years, researchers have seen just two structural variations, called intermediates, when unfolding a particular pair of these helices.

But now, thanks to the Perkins’ group’s tremendous improvements in AFM instrumentation, the JILA team, led by research associate Hao Yu and graduate student Matt Siewny, saw at least 14 intermediates. Some intermediates along the unfolding pathway differed by only 2 amino-acid subunits, or half a helical turn. The group’s ability to see these intermediates occurred as a result of using its modified 9-µm-long AFM cantilevers. This innovation led to a 100-fold improvement in time resolution and a 10-fold improvement in temporal resolution in the group’s membrane-protein studies.

Not only are the membrane proteins folding on smaller structural scales than previously measured, but they are also unfolding and refolding on time scales much faster than could be resolved before now. The unfolding pathway of bacteriorhodopsin is incredibly more complicated than anyone had previously experimentally determined. However, molecular-dynamics theorists had previously predicted such complexity. It turns out that there is now good agreement between the group’s new experimental data and long-standing computational predictions of how a system like this should behave!