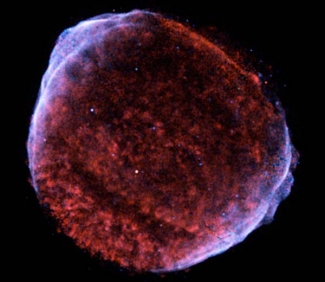 This false color X-ray image taken by the Chandra observatory of the SN1006 supernova remnant shows the forward-moving shock wave (blue) and multimillion degree gas (red), the inner edge of which is currently experiencing a reverse shock wave. The reverse shock wave is not obvious in this image.

Fellow Andrew Hamilton recently confirmed a prediction he made 10 years ago of the location of a reverse shock wave slowing the expansion of the debris from a supernova that occurred in 1006 AD. SN1006 was (and still is) the brightest supernova observed in recorded history; it was visible from Earth (without telescopes) for three years.

This particular stellar cataclysm resulted from the thermonuclear explosion of a white dwarf star about 7000 light years from Earth. The star was thought to have been happily pulling in matter from a companion star (thus far unidentified) until on the verge of collapse to a neutron star, it ignited a runaway nuclear reaction and exploded. A massive cloud of debris created by this event is still expanding high above the plane of our galaxy. The debris cloud, shown at right, is hundreds of millions of times wider across than the Sun. Because it’s so far away, however, it appears to be the size of the Sun or Moon when viewed from the Earth, says Hamilton.

Hamilton and colleagues from Dartmouth College and Johns Hopkins University recently obtained a high-resolution far-ultraviolet spectrum of SN1006’s debris cloud from the Space Telescope Imaging Spectrograph (STIS). The spectrum showed a strong, broad spectral line for the silicon (Si) II ion. The line has a sharp inner edge caused by a reverse shock wave moving into the Si-rich debris cloud, which is expanding at a rate of 7026 km/s. The line’s fuzzy outer edge reflects the expansion’s slowdown to 5150 km/s caused by the reverse shock wave. The two measured expansion velocities are evidence that very little electron heating occurs in the reverse shock wave. Hamilton had predicted these effects in 1997, but had to wait to confirm them for the new STIS spectral observations, which had a resolution 60-fold greater than earlier measurements.   - Julie Phillips