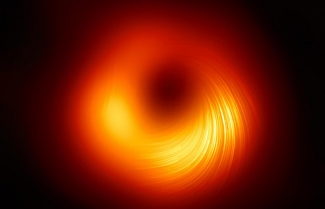 An international team of scientists, including a University of Colorado Boulder researcher, has taken the most detailed look yet at the supermassive black hole at the center of a galaxy called Messier 87. The results suggest the celestial object is surrounded by strong magnetic fields—key ingredients that could help generate galaxy-length jets of particles that shoot out around it.

The research, published in two studies on 24 March, 2021, in The Astrophysical Journal Letters, is the latest to emerge from the Event Horizon Telescope, a collaboration that includes more than 300 scientists from five continents drawing on observations from several telescopes around the world.

In April 2019, the team made international headlines when it released the first-ever image of the immediate vicinity of a black hole. That now-famous portrait of this object shows a dark shadow the size of our entire solar system ringed by a swirling mass of ultra-hot, magnetized plasma called an “accretion disk.”

CU Boulder astrophysicist Jason Dexter is a member of the Event Horizon Telescope collaboration and coordinating author of one of the new papers. He said that the 2019 image finally gave a face to black holes. But for scientists like him who want to understand how the bodies behave, it was just the beginning.

“I think these new papers are going to be a major step forward in using Event Horizon Telescope data to look at how black holes grow,” said Dexter, a JILA fellow and assistant professor in the Department of Astrophysical and Planetary Sciences.

The team’s latest images look at the same black hole, but in polarized light. That’s a term researchers use to describe the orientation of light waves as they travel through space. (Polarized sunglasses work by blocking light with certain orientations, while allowing other light through). Such data, Dexter said, may help scientists to dive deep into the belly of a black hole.

“We’re seeing strong magnetic fields near the black hole,” he said. “These fields may be able to extract energy from the black hole itself and use it to power these jets.”

That hot and volatile environment is Dexter’s specialty.

He explained that the tricky thing about studying objects like M87*, the black hole at the center of M87 more than 50 million light-years from Earth, is that they’re impossible to see on their own. The gravity produced by black holes is so strong that even light can’t escape their grasp if it gets too close.

But scientists can view the area just outside of a black hole and, in particular, its accretion disk. As Dexter put it: “We can’t see inside a black hole, but we can study what’s all around it.”

There’s a lot to study: Accretion disks form when massive central objects gobble down humungous clouds of gas from the surrounding space. Like water circling a bathtub drain, that material will begin to spin around the black hole the nearer it gets. Scientists have long suspected that this churning matter could, under the right circumstances, generate magnetic fields—similar to what makes the field that causes compasses point north on Earth.

“We have two broad theories for what those magnetic fields can look like,” Dexter said. “Some research has suggested that they could be weak and are simply dragged along with the gas. The other idea is that they can become really strong near the black hole and actually push back against that motion.”

To probe the nature of those fields, the Event Horizon Telescope group combined data collected from telescopes spread across our own planet. That information allowed the team to measure the polarization of light from M87’s accretion disk, which, in turn, holds clues to the churning dynamics below.

The group’s results suggest that the black hole’s magnetic fields are anything but weak.

“They’re not being dragged around passively with the gas,” Dexter said. “They’re strong, and that can change the entire structure of how gas is falling into the black hole, and even how this black hole is growing over time.”

Just what that means for the black hole isn’t clear yet.

Dexter, however, believes that strong magnetic fields could be the key to understanding M87’s explosive nature. Scientists have previously observed a humungous “jet” of gas that seems to blast off from around the black hole and stretch for potentially tens-to-hundreds of thousands of light-years. According to theory, the rotation of a black hole itself may twist up the magnetic fields in an accretion disk, generating built up energy that can occasionally burst out to form jets.

“The Event Horizon Telescope gives us the ability to study these processes where they’re really important—where energy is being released and where jets are being launched,” Dexter said.

For now, he’s excited that the data coming from the study has, at least so far, matched the theory. Put differently, the images of M87 to date look a lot like what researchers expected them to—something Dexter finds comforting.

“To me, that’s evidence that we’re on the right track,” he said. “We seem to understand the basic physics of accretion disks and how these black holes grow, which to me is amazing.”

An international team of scientists, including a University of Colorado Boulder researcher, has taken the most detailed look yet at the supermassive black hole at the center of a galaxy called Messier 87. The results suggest the celestial object is surrounded by strong magnetic fields—key ingredients that could help generate galaxy-length jets of particles that shoot out around it.