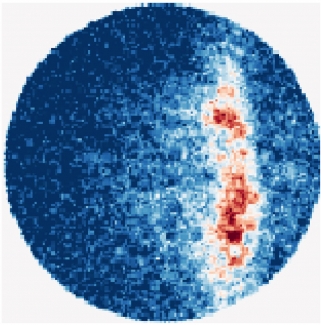 The atomic clock consists of ten thousand atoms and a very impressive laser. The new microscope allows the clock team to see how the atoms interact with this laser. For this photo, the team has turned their atoms into a prism, which allows them to differentiate laser frequencies. Specifically, a magnetic field gradient applied horizontally across the cloud of atoms means that only atoms at a certain location will absorb the laser and jump to the excited state (red). The location and width of the excited atoms then gives information about the laser frequency, both its value and stability. The full view shown here checks the 15th digit of the laser frequency; the thin red slice demonstrates that the laser is stable to better than a few parts in 1016 over 8 seconds.

We all know what a tenth of a second feels like. It’s a jiffy, a snap of the fingers, or a camera shutter click. But what does 14 billion years–the age of the universe–feel like?

JILA’s atomic clock has the precision to measure the age of the universe to within a tenth of a second. That sort of precision is difficult to intuit. Yet, JILA’s atomic clock, which is the most precise clock in the world, continues to improve its precision. The latest jump in precision, of nearly 50 percent, came about from a new perspective.

“The precision of our clock is now about two and half parts in 10 to the 19. Which is an almost impossibly tiny, tiny number to actually realize or understand,” says G. Edward Marti , a JILA postdoc in the Ye group, and integral member of JILA’s atomic clock team. “We know we’re not at the limit of this.”

The atomic clock is more than just an atom. It’s actually a system of thousands of atoms and a very impressive laser. This system works much like an old time-keeping system: a grandfather clock and the sun. A grandfather clock records time by swinging a pendulum back and forth. Similarly, the laser has a ticking electromagnetic field (although it ticks much faster than a pendulum clock can swing, about 1015 times faster).

“The idea behind all of these clocks is that the atoms serve as a very stable frequency reference,” says Marti. “And we use atoms, instead of astronomy, to be able to tweak our clock to always be the same rate.” But are the atoms really a perfect timekeeper?

When measured from one day to the next, the time when the sun reaches high noon jitters. This jitter introduces error into the solar time reference. Assuming the sun revolved around the earth, the source of this jitter is untraceable, and the error remains. But by changing perspective–days are not generated by the sun revolving the earth, but by the earth rotating beside the sun, within a complicated solar system in which the sun, moon, and sibling planets tug at the Earth’s tides, thereby affecting its rotation–the jitters can be understood. When the jitters are understandable, the error they introduce can be accounted for and removed. And removing these errors results in a more precise clock.

Atoms may have similar jitters adding error to the atomic clock. But to find them, the clock team had to change how they looked at the system, quite literally.

The team built a microscope to look directly at the atoms. And when prepared correctly, the atoms divulge many secrets. For instance, the atoms were used as a prism to analyze laser properties. Much like how a prism divides white light into colors, the atoms can differentiate laser frequencies.

With their new imaging technique, the team was able to measure the effect of the laser holding the atoms, and how that effect could introduce errors into their system. They were also able to quantify how long their atoms remained coherent, i.e., in a quantum superposition. Specifically, their atoms were in a superposition of two atomic states useful for timekeeping, which are separated by a visible photon worth of energy. Their atoms remained coherent for up to a record-breaking 15 seconds, a near eternity for a quantum system. The new imaging technique, called imaging spectroscopy, has already reigned in the clock’s precision by nearly 50 percent, and the team expects their new perspective to pave the way towards future clock applications.

As the precision of the clock continues to improve, the applications for clocks continue to grow. Soon, Marti says, atomic clocks will measure gravity’s influence on time using atoms separated by only a few millimeters. And searches for new forms of dark matter, changes in fundamental “constants”, and possibly even quantum gravity, will soon gain new perspectives once the clock’s precision realizes new experiments.

JILA’s atomic clock is unique in that it uses a quantum degenerate gas, and quantum many-body physics – the first for a clock system. The use of a quantum many-body system allows many more atoms, on the order of ten thousand, to be stuffed into one clock. The increased number of atoms is a big part of the clocks’ previously achieved precision.