Laser light knocks both neutral and charged bismuth atoms off a disk of bismuth metal. The negatively charged atoms then bind to a carbon dioxide (CO2) molecule, and an electron is transferred to the CO2 molecule from the metal. However, as more and more CO2 molecules are added, two CO2 molecules will bind to a single metal atom and form a carbon-carbon bond, creating an oxalate molecule, which steals more negative charge from the bismuth atom. 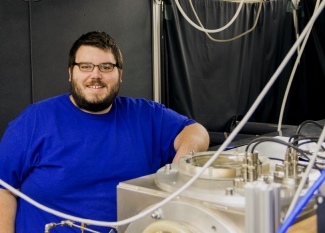 Graduate student Mike Thompson of the Weber group wants to understand the basic science of taking carbon dioxide (CO2) produced by burning fossil fuels and converting it back into useful fuels. People could then use these fuels to generate electricity, heat homes and office buildings, power automobiles and trains, fly airplanes, and drive the industrial processes of modern life.

However, the conversion of CO2 into useful fuels is a challenging problem in chemistry and chemical engineering. It takes energy to turn CO2 into carbon monoxide (CO) and CO into natural gas (methane) and liquid fuels such as gasoline. The good news is that methods using electrochemical cells to transform CO2 into CO could easily be powered by renewable energy from intermittent resources such as the Sun and the wind. Instead of adding more and more CO2 from fossil fuels to the atmosphere, people could recycle CO2from burning fossil fuels using electrochemical cells and alleviate the progression of global warming.

The trick is figuring out how to lower the amount of energy needed for turning CO2 into CO. Without chemical tricks, the energy cost turns out to be way too high to be economical yet. The trick that’s needed is to use a catalyst. A catalyst is a metal or other substance that accelerates a chemical reaction without being affected. 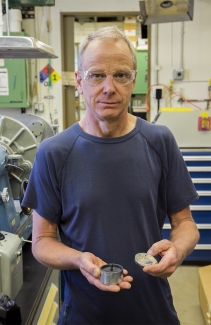 Hans Green shows an aluminum mold and bismuth disk made for the Weber group’s new experiment that models an electrochemical cell. The group’s goal is to use the cell to convert carbon dioxide into carbon monoxide.

Fortunately, electrodes made of metals such as gold, silver, or bismuth can catalyze the transformation of CO2 to CO. Bismuth has advantages over other metals, including (1) working as well, if not better, than gold, (2) being readily available in large quantities because it is a by-product of lead mining, and (3) costing nearly 350 times less than gold per gram. Because of these advantages, bismuth metal is under consideration for CO2conversion, but the molecular details of the process are not well understood. To gain a deeper insight into the process, the group recently began investigating the use of bismuth metal in CO2 conversion catalysis on the molecular level.

The first step was acquiring a disk of bismuth that could be used to produce bismuth atoms. A trip to see Hans Green in JILA’s instrument shop resulted in the discovery of some 20-year-old, high-purity bismuth shot (1–2 cm pieces of pure metal). Green added the shot to a tailor-made disk-shaped aluminum mold and heated it up on a hot plate. After the disk cooled, Green machined it to provide a smooth surface to make it possible for the laser beam to blow off atoms one by one.

The second step was to begin a study of the chemistry of CO2 conversion by looking at how to transfer an extra electron to a CO2 molecule. This step costs a lot of energy unless a catalyst is used.

“We study how a few CO2 molecules bind to a single charged bismuth atom,” Thompson explained. “The reason we do this is that actual electrochemical cells are very complex systems, so we’re trying to simplify the system as much as possible so we can get at the heart of the interaction.”

What Thompson and his colleagues learned from studying their bismuth-CO2 cluster model system was that a CO2 molecule docked onto a negatively charged bismuth atom through the carbon atom. The chemical bond between the bismuth atom and the CO2then allows an electron to spend about 65% of its time on the CO2 molecule. By the time the researchers positioned approximately four CO2 molecules around the bismuth–CO2molecule, the extra electron was almost completely transferred to the attached CO2molecule.

But when a fifth CO2 molecule was added, suddenly two CO2 molecules bound to the metal atom. The two CO2 molecules also formed a carbon–carbon bond with each other, forming a molecule called oxalate. This is similar to processes in a real electrochemical cell, where oxalate can also be formed. This is a significant finding because it shows that the Weber group’s cluster model can be used to learn something about processes in electrochemical cells. And, with some additional work, there’s a good chance this model system will also produce CO!