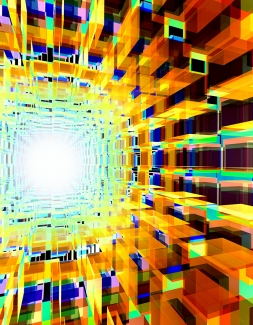 Artist’s concept of the quantum building blocks of a laser.

The quantum world is not quite as mysterious as we thought it was. It turns out that there are highways into understanding this strange universe. And, graduate students Minghui Xu and David Tieri with Fellow Murray Holland have just discovered one such superhighway that has been around since the 1950s. Traveling along this superhighway has made it possible to understand the quantum behavior of hundreds of atoms inside every laser used in JILA, including the superradiant laser in the Thompson lab that works entirely differently from all the others.

The weirdest thing is that this is the same superhighway traveled by the SU(4) group theory used to explain quark physics. Quarks are elementary particles that make up hadrons; hadrons are things like the protons and neutrons that sit inside every atomic nucleus. The lowest energy quarks are known as up, down, strange, and charm. And, as it turns out, up, down, strange, and charm quarks are analogs of the four basic “Lego building blocks” that also describe the quantum behavior of atoms in a laser.

So why is it so hard to figure out what’s happening with hundreds of atoms inside a laser? The answer is easy. It’s the fault of quantum mechanics and its mind-boggling complexity. A mere three hundred atoms, each with two possible states, have as many different combinations of quantum states as there are atoms in the entire Universe.

Fortunately, Fellow Murray Holland and graduate students Minghui Xu and David Tieri have just found a pathway through this complexity. This pathway exists because of something called invariance. Invariance is responsible for the familiar laws of conservation of energy and conservation of momentum that govern the classical world we are more familiar with. The two laws state that if no external forces are acting on a system, (1) the amount of energy remains constant over time and (2) an object will continue moving at the same speed forever. The fact that energy remains constant is due to the invariance of choosing the origin of time. The fact that an object just keeps going at the same speed is due to the invariance of choosing the origin of space.

As it turns out, the Holland group has just discovered an intricate invariance that governs the quantum physics of lasers. As “luck” would have it, only a relatively small number of possible quantum states are compatible with a particular value of the invariant quantity once it’s determined by a laser system itself.

It’s as if a laser can “choose” to be made of only one color such as red, blue, green, yellow, black, grey, or clear Legos. But, once decided, the laser obeys a conservation law that means that the color of the Lego blocks won’t change in time. The constancy of the color represents the invariance. Once the invariance is in place, one can make any state of a laser from just four shapes of quantum Lego blocks, a square (up), a corner piece (down), a thin arch piece (strange) and a rectangle (charm).

“We’ve got four types of blocks, and, out of them, we can make everything, Holland explains. “When you realize this, there is a clear path to an unbelievable reduction in complexity.”

Holland and his students have just proved this assertion in a new Physical Review A paper. In the paper, they showed how “quark physics” mathematics could be used to solve the quantum master equations for both ordinary and superradiant lasers, feats once considered impossible.

The new theory opens the door to finding ways to build even more complicated structures out of the basic four quantum Legos. Plus, new building blocks, such as laser analogs of the much heavier top and bottom quarks, may be found.

“We already know there are some optical systems where the building blocks are slightly different,” Holland says. “The questions are: How far can we push this new idea? Can we use our new theory to understand other important systems in quantum optics and ultracold gases?”

Perhaps an important question for the rest of us to ponder is: Without invariances, would we even have the world we know? — Murray Holland and Julie Phillips